No country in the Leewards offers the number of really good anchorages as those in Antigua and Barbuda. You could cruise for two weeks without stopping at the same anchorage twice. Although there are sociable places with amenities, it is the hidden spots where you can be all on your own that make these islands special. They stay this way because they are difficult to navigate, and only those highly proficient in reading the water colors are going to feel comfortable on the eastern and northern side of Antigua or sailing over to Barbuda.

Antigua and Barbuda are an independent nation with a British tradition and a population of around 65,000.

In the old days it was hard to find secure ports that were easy to defend, with immediate access to the trade winds, yet protected enough to careen a ship, and be safe in a hurricane. Falmouth and English Harbour sit side by side, almost touching at the closest point, and they meet all these requirements. Their potential was recognized as early as 1723 and work was begun on the English Harbour Dockyard. It was completed as it stands today in around 1745 and was Britain’s main naval station in the Lesser Antilles. Nelson was stationed here in 1784 under Sir Richard Hughes, who had recently blinded himself in one eye while chasing a cockroach with a fork. Nelson eventually took over as naval commander. He did not enjoy Antigua and did not get on well with Governor General Shirley (after whom Shirley Heights is named) or the plantocracy, who resented the boring way in which he insisted on enforcing the Navigation Act. This meant he kept the port closed to trade for all but British ships. Nonetheless, the dockyard is now generally known as Nelson’s Dockyard in deference to Britain’s favorite hero.

The arrival of Nicholson’s Charter Company and the restoration of the ruins into a beautiful yet functional monument gave momentum to the development of the yachting industry here. Today these harbors are managed by the National Parks Authority. They are not only the yachting capital of Antigua, but a major Caribbean yachting center.

English Harbour and Falmouth attract hundreds of cruising yachts and are the winter home of many gold-plated charter yachts of sail and power. English Harbour is prettier; Falmouth Harbour is more convenient for most yacht services and it attracts more of the larger yachts. A wide range of marine services and a convivial social scene can be found here, complete with happy hours and jump up nights. Antigua holds is famous race week every year at the end of April. It is preceded by the best classics regatta in the Eastern Caribbean. Then for those that want a Fasten type race in more idyllic conditions, there is the Caribbean 600.

The whole of Nelson’s Dockyard has been beautifully reconstructed to house hotels, restaurants, and businesses. It is a fitting scene for Antigua’s main port of arrival. Falmouth Harbour is considerably larger and surrounded by hills. It has many more facilities than English Harbour and is favored by most of the charter yachts, superyachts and larger cruising yachts. Most places of interest are strung between the Dockyard and the eastern part of Falmouth, all within a few minutes stroll.

Many delightful walks have been laid out in this area. Everyone should take the short path out to Fort Berkely Point by following the trail from just behind the dinghy dock. More adventurous souls should also take the hike up to Shirley Heights which affords magnificent views of both English and Falmouth Harbours. The path is in shade for much of the way with good examples of the local dry vegetation. Dinghy to Columbo’s dock, turn left and follow the road. You will see the footpath on the right posted “To the Lookout.” This takes you to the top. Sensible shoes are essential.

My most enjoyable evening in Antigua recently was learning to cook at Nicole’s Table. In a couple of hours we produced a feast, with ample rum punch to help us along. Then we ate it out on the patio of Nicole’s house, which has a magnificent sunset view as it is on a hill behind Runaway Bay on the west coast. 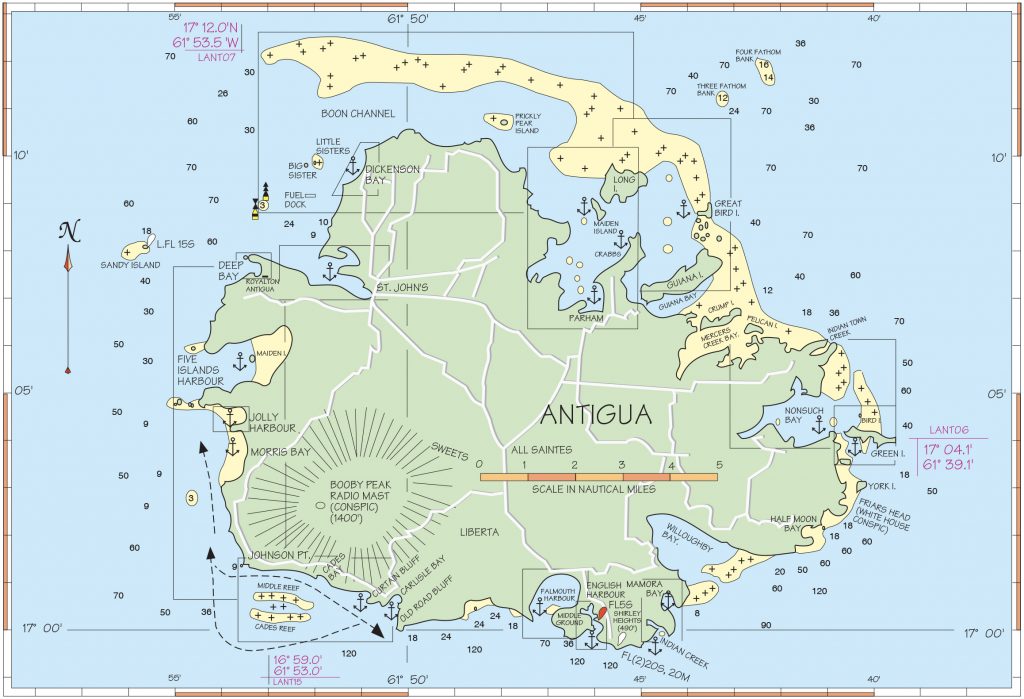