Chris Doyle Publishing has decided to embark on an exciting new project unique to the guides’ 40-year history; a stand-alone guide to yachting and watersports in Grenada, Carriacou, and Petite Martinique to be available in print November 2022. This guide will be free to the public, advertiser-funded, and appeal to not only yachtspeople and charter guests, but to traditional tourists and visitors as well.

Working closely with the Marine and Yachting Association of Grenada, we have produced an in-depth guide with all the useful charts and information on navigation, marinas, and services their readers are used to, plus expanded sections on snorkeling and diving, environmental concerns, and giving back to the community.

Since publishing the 20th edition of the Cruising Guide to the Windward Islands in 2020 the world of travel has changed significantly. While the shallow reefs, white sand beaches, and protected anchorages of the Caribbean are still there, life ashore has become more complicated, and travel between island nations more cumbersome. The yachting industry in many island nations has been and will continue to be a popular and important part of the economy, and we recognize that many sailors and charter guests will be opting to spend more time in the waters of individual nations.

While we hope to resume regular updates of the Windward and Leeward Island guides in coming years, we are excited to make a Grenada guide part of our catalog.

Grenada, a spectacularly beautiful island, has lush green mountains, crystal waterfalls, golden beaches, and fragrant spice trees that give the island its epithet: Isle of Spice. Come from late January to early March to get the added bonus of seeing the hills ablaze with hundreds of bright orange, flowering immortelle trees. This is pure magic.

Grenada’s history has been interesting, with early wars and revolutions. More recently, things got exciting with the transition to full independence in 1974. Most Grenadians felt this was premature, and instead of jubilant celebrations, the island was on strike and in protest. Nonetheless, independence was thrust upon her, and Grenada came of age under the rule of Sir Eric Gairy, a colorful and controversial figure who had a very divisive effect on the population. This resulted in the 1979 left-wing coup by Maurice Bishop, who greatly admired Fidel Castro. Bishop attempted to turn Grenada into a socialist state. He improved medical care and education, but he did so at the cost of freedom. Anyone who opposed him was thrown in jail and all independent newspapers were banned.

However, this didn’t insulate him from opposition within his own ranks. Second-in-command, Bernard Coard, his wife Phyllis Coard, and members of the army took Bishop prisoner in 1983. After a massive crowd freed him, an army group executed him along with half his cabinet. At this point, the US, along with Grenada’s eastern Caribbean neighbors (the Organization of Eastern Caribbean States), launched a “rescue mission” and were welcomed with open arms. Now, many years later, this is old history and, looking back over these last years, Grenada as an independent county has experienced the best, most democratic, and most productive years since it was founded. Grenadians are a warm and hospitable people, exceptionally so once you get off the main tourist route.

From a yachting point of view Grenada has developed rapidly. Haulout facilities are found in St. David’s, Prickly Bay, and Clarkes Court Bay. There are Marina facilities in St. George’s, Clarkes Court Bay, Prickly Bay, Le Phare Bleu Bay, and Mt. Hartman Bay. St. George’s has the big state-of-the-art Camper and Nicholson Port Louis marina, as well as The Yacht Club. Three big chandleries supply yachting gear, and The Yachting Act legislation allows for low-duty supplies, parts, and chandlery. It also allows you to clear out at the same time as you clear in, as long as you are not staying more than three days. However, you do have to fill in all the forms twice.

Grenada is host to a few important yachting events as well as smaller club races. Grenada Sailing Week, a week of racing and social events, is held at the end of January. All entrants are welcome, from serious racing boats to liveaboards. The Grenada Sailing Festival, also known as the Workboat Regatta, is the following weekend. Grand Anse beach is at the heart of the action, where colorful traditional sailing fishing boats launch and finish every race right on the sand.

The Round Grenada race, a two-day event with a stop in Carriacou, is arranged by the Petit Calivigny Yacht Club (PCYC) and normally takes place in August. PCYC also organizes and supplies boats for match racing every couple of months. It is based out of Le Phare Bleu Marina and everyone is welcome.

The Grenada Yacht Club organizes other races and Grenada has a strong marine trade association called the Marine & Yachting Association of Grenada (MAYAG).

Few islands are as photogenic as Grenada, with mountains, rivers, rainforest, and houses surrounded by flowers. Sometimes, when you are hiking along a river amid nutmeg trees, it has an uncanny resemblance to early pictures of the Garden of Eden. A swim in one of the waterfalls will leave you feeling wonderfully refreshed, with your hair and skin feeling extra soft. Concord Falls are in beautiful countryside and anyone with a spark of adventure should hike the extra half-hour to the upper falls. Seven Sisters Falls are the best, a lovely one-hour hike. You need a guide if you want to make it to Honeymoon Falls, another half-hour from Seven Sisters. Many of the falls are on private land and the owners levy a small charge.

The most beautiful road in Grenada runs from Gouyave to St. Andrew. It has two forks, Clozier is the prettier and Belvedere the easier. You snake across the heart of Grenada through verdant agricultural land, with lovely mountain views.

Grand Etang is a crater lake and the Forest Center is close by. You often see monkeys where the buses stop. Trails are laid out so you can wander into the forest. There are wonderful hikes, including one halfway across the island (four hours). The road from St. George’s to Grand Etang goes through some lovely forest, and you can include a detour to the Annandale Falls.

Mt. Edgecombe lies in the hills near Victoria. It is a lovely traditional estate house nestled into 28 acres of fruit trees and flowers overlooking the sea. It makes a special place to stop for lunch on an island tour and it is delightful enough that you may want your tour to stop right there. They have a giant covered verandah for relaxing and eating, and rooms for those that want to stay some days in the country. It is wonderfully peaceful with just the sounds of birds and tree frogs. You will be welcome here, but call in advance and make a reservation; if they are not expecting anyone, they may give the chef a day off.

Grenada has a rapidly growing chocolate and cocoa industry and several small chocolate factories have been established in recent years. The original, The Grenada Chocolate Factory, was the brainchild and passion of Mott Green, who loved sailing so much that he delivered chocolate to Carriacou in a tiny beach catamaran. Sadly, Mott died in an accident in 2013, but the factory has been marching on. Let the high-octane bars (71%, 82%, and 100% cocoa) melt in your mouth for a creamy chocolate flavor unlike any commercial brand. Or try the delicious nibulicious or saltilicious bars. They all make perfect gifts. They have a shop and interpretation center and give tours of the factory daily (except Sundays, no reservation necessary). You can also visit the factories of Crayfish Bay Organic Estate, Jouvay, Tri-Island Chocolate, and Belmont Estate. All give tours for a fee.

Belmont Estate is a typical and very picturesque country farm where cocoa pods are grown. Take the tour and they will show how they process the beans.

Crayfish Bay is owned and operated by Kim Russel and his partner Lylette Primell and is the only single-farm organic certified operation in Grenada. Kim arrived in Carriacou in 1989 aboard his Collin Archer-style Dutch steel monohull and is now passionate about socially responsible cocoa production. He designs and builds most of his own machinery and they give intimate and informative tours upon request.

Grenada now has a week-long chocolate festival in May, founded and organized by the Fielden family of True Blue Bay Resort.  Visit their House of Chocolate in St. George’s.

Many years ago I kept an eye on a coconut plantation for a friend. To get there I passed the River Antoine Rum factory, where they make strong white rum called Rivers. I fell in love with this place, which still runs much as it has since the mid-1800s: a giant water wheel crushes the cane, the dry stalks are burned to heat the juice, and large wooden scoops manually move the hot juice from one big cast-iron bowl to the next as it gets hotter (they call these bowls “coppers,” as the original ones were made of copper). They now open this rum factory to visitors and give tours for $5 EC, which gets you a full explanation and a taste of the rum. Ask for the strongest rum, drop a bit of ice in the glass, and watch it sink. They do not fire up the factory machinery every day and it is more fun to go when everything is going, so call in advance and ask (442-7109 or 442-4537). The location fits in well with visiting Belmont Estate. Both places serve lunch.

For hiking, Henry’s Safari Yacht Services & Tours [VHF: 68], is the best guide (call sign: Henry Safari Tours). They specialize in hikes and know the trails well, including Seven Sisters Falls. They do turtle watching tours from May to August and do ATV (all-terrain vehicle) tours of the island.

Most other taxi drivers are reluctant to get their feet muddy, but there are a few exceptions. Wondering Soles is a tour and hiking company that aims to give their guests an authentic experience, away from the traditional tourist attractions. Many of their hikes take you through small villages where you can meet the locals and taste seasonal fruits and juices. Most hikes are within the parish of St. George, though they also do island tours and waterfall hikes. A light lunch is usually included (423-0550).

Well into his 80s, no one has hiked more of Grenada than Telfor Bedeau (442-6200). You can rent a car and take him along as a guide, as he now calls himself a driving guide. His hiking tours have been handed over to Simon Green (459-1582) of Hidden Treasures Hikes. He can take you up all of the major peaks or lead you off the beaten path with his ‘Backyard Tours’ that give you a taste of rural Grenadian life. Beach hopping, Atlantic coastline, snorkeling, and hot spring hikes are all part of his repertoire.

Keep in mind that all Grenada’s anchorages are within an easy taxi ride of each other, so wherever you are, read about all the anchorages. 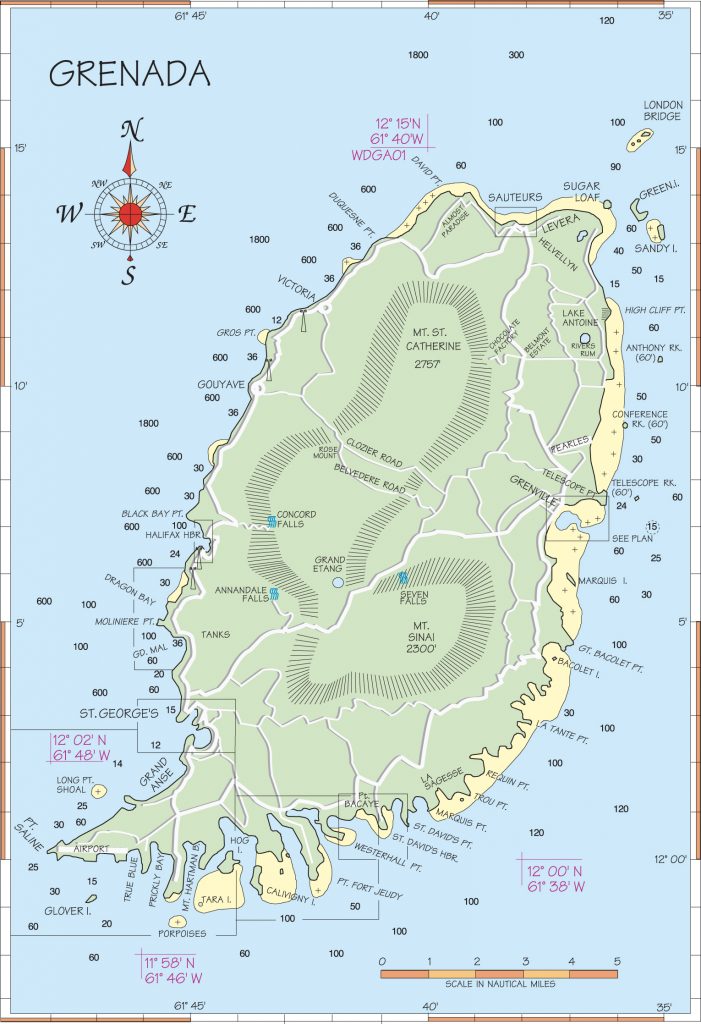