Guadeloupe, known by the Caribs as Karukera (Island of Pretty Waters), has a population of 330,000 and is part of France. It is partly agricultural, with the emphasis on sugar cane, and the local “rhum” is highly valued in France. Tourism is also important.

Guadeloupe is composed of two islands in the shape of a lopsided butterfly, with a river separating the two halves. Whoever named the islands had a sense of humor, because the larger mountainous one is called “Basse Terre” (low land) and the smaller low one “Grande Terre” (large land). Grand Terre is a much older island. It once looked more like Basse Terre, but over millions of years its mountains have eroded. Basse Terre is a younger volcanic island. Yachts of up to 6.5-foot draft can navigate between the two islands on the Rivire Sale.

You should visit the interior, if possible, at least in mountainous Basse Terre, which has some exceptional views and sites. Route de la Traverse runs through the national park, smack in the middle of Basse Terre. The Crayfish Waterfalls are well worth a visit and swim, but make your way to the upper part to avoid too many tourists. If you are driving yourself, take the detour to Morne  Louis for the spectacular view from the top, overlooking Pigeon Island. Some buses that run between Pointe a Pitre and Pointe Noire take Route de la Traverse .

The most dramatic destination is the 350-foot Carbet Waterfalls in the south of Basse Terre. These are the tallest falls I know of in the Eastern Caribbean. If you rent a car, it is easy to find the car park and you reach the second falls by a beautiful 30-minute walk on a well laid out trail through the rain forest. But this is just the beginning as many hikes have been well laid out in this area. Try the one-hour hike up to the first falls. This takes you above the rain forest through cloud forest. These first falls, which are equally as high as the second falls are very red from the volcano. Whichever fall you hike to, remember to take your bathing things, they all have good pools below.

Other attractions in this area are several crater lakes including As de Pique, shaped like an ace of spades.

Pleasant countryside of rolling hills covers much of Grand Terre, especially the northern part, which has a lot of sugar cane and picturesque ruined windmills. Towards the southeast corner the town of St. Francois has a marina, and draws many kite-boarding enthusiasts.

The small town of Deshaies on the northwest coast has a really spectacular botanical garden, which includes some exotic birds.

Pointe a Pitre, the largest city, has a big marina, excellent chandleries, and you can get all kinds of boat work done. The capital city and government center is the town of Basseterre, which is smaller.

Most French post offices have ATM machines, and these are sometimes easier to find than a bank. 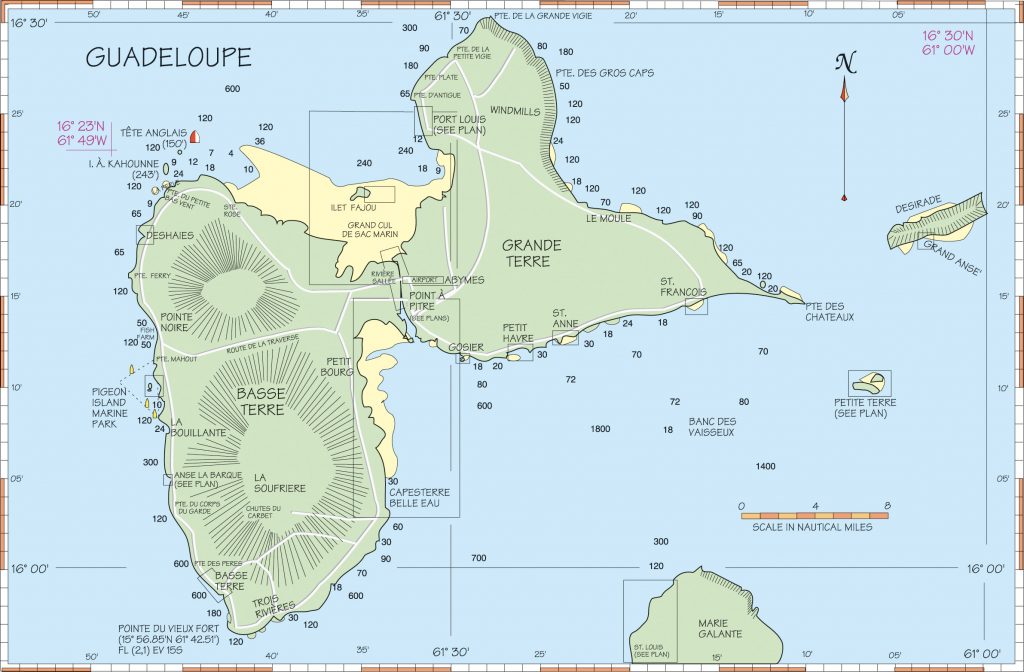