Guyana is a spectacular country, 83,000 square miles of rain forest, savannah and coastline, with less than a million inhabitants. There are so many rivers that the name Guyana is derived from the Amerindian word meaning Land of Many Waters. The area of the Guianas, bounded by the rivers of the Orinoco, Amazon, Rio Negro and the Atlantic Ocean, is believed to have been settled before 900 AD by Warrau Indians, and later by the Arawak and Carib tribes. However, there is no evidence from these times of a very advanced civilization. Sir Walter Raleigh’s voyage in 1595 and his subsequent book on the riches of Guyana did much to stimulate interest in the area. The French, the English and the Dutch laid claim to the region in the 17th Century, and it was settled in separate areas by the three nations ~ the Dutch colonies being located in what is now Guyana. From 1781 onwards, British influence became increasingly evident, but it was not until 1814 that the colonies of Essequibo, Demerara and Berbice were finally ceded to Britain, while the Policy & Combined Courts, the legislative and executive bodies created by the Dutch, remained in Operation under British rule for another century. In 1831 the three colonies merged to become British Guiana (later Guyana). The territory attained its independence on May 26, 1966 and became a Republic in 1970.

The official language is English and everyone speaks it. It is the only English-speaking country in the South American Amazon Rain Forest. Some also speak Creole.

Many Amerindians remain in settlements throughout the territory and apart from them, the population is fairly evenly divided between those of African and those of East Indian origin, with a smattering of Dutch, English and Chinese.

The Amerindian themselves have several culturally rich settlements, which you can visit to observe their way of life. Many of them are cowboys and put on a magnificent rodeo once a year.

Georgetown and many of the agriculturally rich coastal lands lie below the level of the sea at high tide. They are protected by miles of earthworks built to keep the sea out. A system of canals and lock gates are used to drain the land, These are opened at low tide and closed against the incoming one.

The ecotourism in Guyana is unsurpassed with magnificent waterfalls and wildlife, and anyone visiting here should spend some time in the interior.

The area designated for yachting is about 40 miles up the mighty Essequibo River. At this point the water is fresh and clean, and good for swimming, though not very clear as there is always an organic reddish color from the forest.

In this region are a couple of little resorts you can use as a base, and main settlement is a small mining town called Bartica. There is plenty to explore right from here, and when you want to go further into the interior, arrangements are easily made.

It should be appreciated that at the moment there are no yachting facilities, and the only form of tourism is low-key ecotourism. While individuals have been showing Guyana to selected visitors for some years, the government only created a tourist board a couple of years ago.

If you visit, you will be one of the pioneer yachts to do so, just as I was some 35 years ago. The government is keen to attract yachting facilities but this will take time to happen. I think probably about 15 yachts a year visit at this time

The advantage of this is that, unlike the Eastern Caribbean to the north, where you will be one in thousands, you will be unusual here. People will be happy to get to know you, and you will have the satisfaction of feeling like a true explorer. 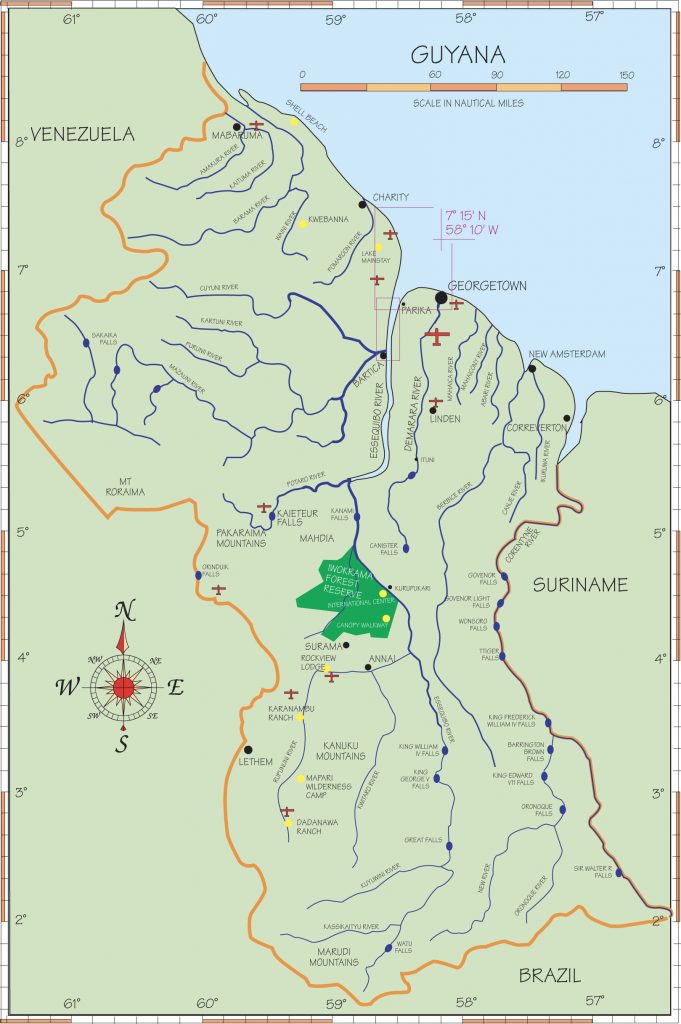