The Saintes are an irresistible group of islands with idyllic Gallic charm. They are small, dry, and steep, with red and brown cliffs. Mountains climb to over 1000 feet and white beaches abound. After a hard day’s sail, it is bound to be love at first sight.

The only small town, Bourg des Saintes, is on the largest island, Terre D’en Haut. The Saintes have been French since shortly after they were colonized, and have long supported a small community that used to rely almost entirely on fishing. There is a strong link to the north of France, especially Brittany, and some years ago you could see beautiful Breton style fishing boats all along the waterfront. Boats are now designed to take the larger outboards. Since the islands were never agricultural, no slaves were imported, and the handful of inhabitants that are of African descent have arrived fairly recently.

Bourg des Saintes is an adorable seaside town, sparkling clean and picturesque, with red roofs and a handful of those older Caribbean buildings that are all balconies and gingerbread. Flowers grow in abundance around the houses and no one is in a hurry. Local boats are anchored all along the waterfront.

In the last two decades, tourism has become a major industry. Many ferries arrive each day from Pointe a Pitre, bringing an influx of day-trippers. There is a sort of rush hour when they arrive at 0900 and another when they leave at 1700. Locals make their living renting scooters, selling t-shirts, and feeding them. Terre D’en Haut is much quieter before they arrive and after they have gone. From a yachting point of view, the Saintes offer delightful choices: you can enjoy the restaurants, shops and life in Bourg des Saintes, and then, when you want real peace, you can migrate to Ilet Cabrit or Terre d’en Bas.

Fort Napoleon, built 1867, stands on a hill to the north of town, with a commanding view of the harbor. It is only open 0900 to noon, and there is an entry charge (about 4 Eu), which goes toward the upkeep of the fort. The fort has been magnificently restored. The whole of the top half is a well-tended garden of cactuses and succulents, which are labeled so you can identify all those plants that have been stabbing you. When the aloes bloom, they attract a horde of hummingbirds. Iguanas, fat from tourist scraps, will come right up to you. As you look down on town through your camera viewfinder, every shot will look like a picture postcard. Inside, the museum has early furniture and a section on the famous battle of the Saintes, when England’s Admiral Rodney demolished the French fleet under De Grasse in 1782. You will also find some lovely examples of the old Saintoise fishing boats, which are becoming very rare. It is not hard to walk up to the fort. Even gravitationally-challenged cruise ship passengers do it.

On the other hand, you do need to be reasonably fit to make it to the island’s most spectacular view from Le Chameau, by the old Napoleonic lookout tower. The road is closed to traffic and you have to walk up. It is about 1,000 feet in elevation, and quite steep. Check out the rickety ladders in the tower, and if you think they will support you, climb them for a spectacular 360-degree view. You see over town, round to Ilet Cabrit, and to the south. This is the highest point on the island, and from a photographic standpoint, much like being in an airplane. For photographing town, you will want the afternoon light. When the garbage dump is smoking, it detracts from this walk.

You can find a beach to suit your mood. One of the nicest is Baie de Pompierre, which we write up in a separate section. If you like pounding waves, surfing, or body surfing, take the airport road and keep going on to Grand Anse. This long straight beach has rugged cliffs at both ends and is totally exposed to easterly swells. Swimming can be dangerous in rough conditions. If you walk to the south end of the beach, you will come to another road. Follow it south to another small, secluded beach, where you can snorkel around the rocks.

There are many fabulous walks along marked trails on the hills between Marigot and Baie de Pompierre. Start in Marigot behind Le Paillotte restaurant and follow the marked trails to Fort Caroline. Fort Caroline is just an old ruin, but there are lots of great views and you are likely to see iguanas. Le Paillotte makes a convenient place for lunch afterwards.

For the really adventurous, Caraibes Escalade, has a beginners rock climbing ascent in Baie de Marigot, which is safe in as much as you are roped onto a series of fixed points. The climb affords spectacular views. 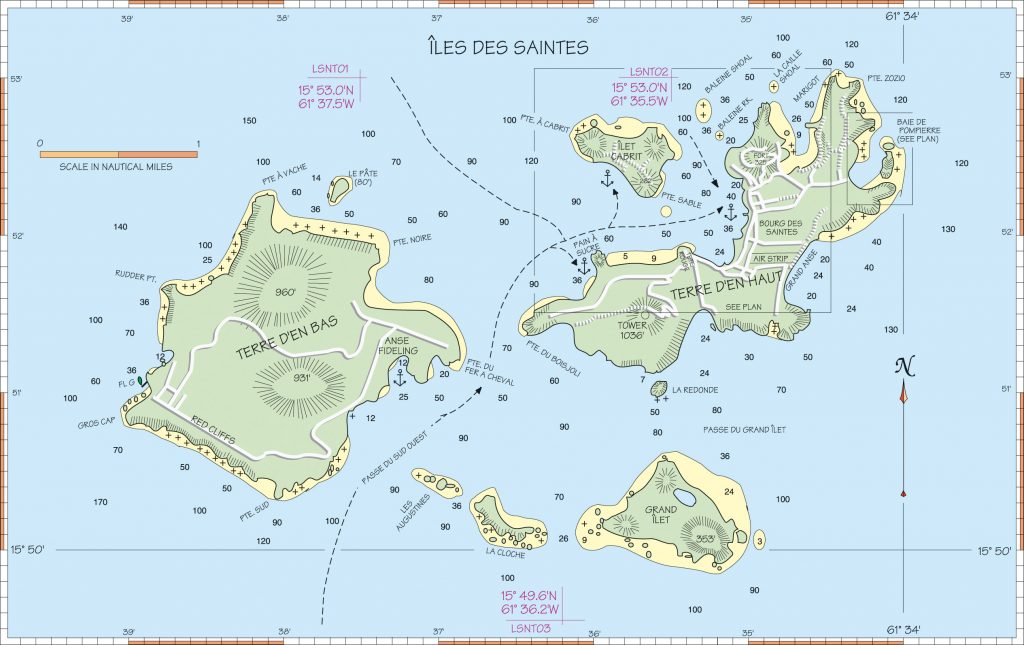