Think Mustique and most people’s minds will turn to the rich and famous. However, as the other Grenadine islands get taken over by a land selling and house building frenzy, Mustique might soon be better soon be known as one of the least spoilt and most natural of the Grenadine islands; a place where you can hike or bike or wander in peace – through an often wild landscape.

The Mustique Company, which manages the island, is owned by the landowners, who have decided to limit the number of houses outside the village to 90. By limiting the supply of houses, they have shown that you can not only preserve the environment but do well in real estate. House prices there are not in millions of dollars, but in tens of millions of dollars. Luckily, for most of the year yachting visitors are welcome to wander the roads and use the trails, a welcome difference from some newer and brasher developments that use keep-out signs and guardhouses to stop you getting anywhere on the property.

Yachtspeople would to well to suppress any groupie tendencies that might incline them to search for the rich and famous and instead take advantage of some the great trails in the conservation areas. The wonderful thing is that you can start right from Britannia Bay and walk to beautiful, undeveloped places. The following will help you find your way. 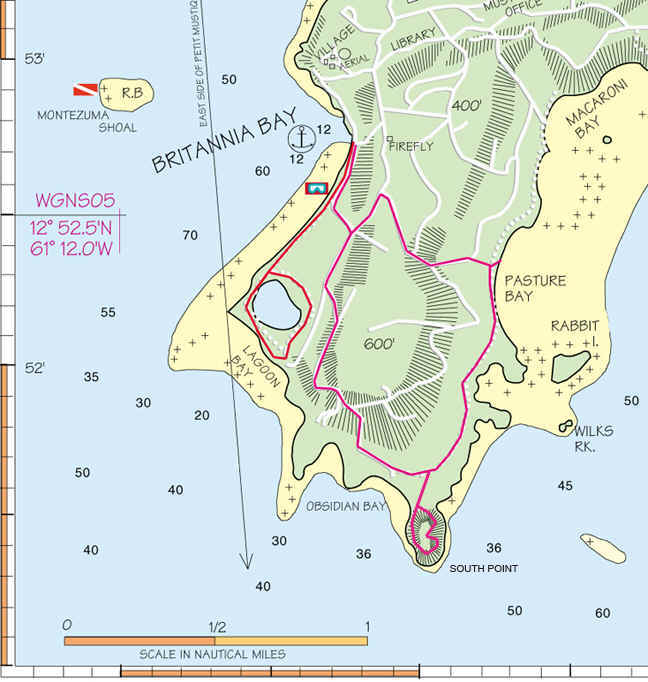 The Salt Pond Trail (45 minutes to an hour)

Our first exploration led us south along the shore. We soon left the spanking new road and found ourselves on a coastal pathway with palms and beach. There comes a point at which the salt pond almost touches the beach. Here we found ourselves on the salt-pond trail, which goes right round the lagoon. A side-trail leads to a cute observation blind with seats and windows, where you can hang out with binoculars and identify any birds. (We did not have our binoculars, but we saw a fine gecko inside on the ceiling). The path emerges in Lagoon Bay with a perfect swimming beach. We continued east along Lagoon Bay to the roadway where the trail starts again round the east and north side of the pond. Way back through the mangroves you catch glimpses of the Mustico work buildings. This helped with orientation on our next day’s walk. A clearing allowed us to see sandpipers and a whimbrel. They have several signs on trees so you can add black, white, and button mangrove to the red mangrove you probably already know.

The next morning we set out on a more ambitious hike that would cover the southern and wildest third of the island. We left at 0715, and would not have wanted to leave later as, by the time we got back, the day was getting hot. The first part was on road; it was shady and cool, we saw our first tortoise of the day ambling along the roadside. We followed the road south back towards Lagoon Bay, but this time stayed on the road rather than following the beach, which meant going one block east. After 20 minutes or so, there comes a point as you get close to the salt pond, where you see first a works driveway on your right, and the road down to Lagoon Bay. At this point the road goes uphill and has two gateposts in either side – uphill past the posts is the way to go. If you stay on the main road, it is hard to go wrong until you come to a sharp left turn. On the corner of this turn is a concrete shed and a cattle grid goes across the road. On the opposite side of the raod is a sign saying “Penthouse”. Turn left here. If you fail to do this, you will come to Obsidian House; an indication you have missed it. It is uphill again, but early in the morning, it is shady and cool. You come to a big house on your right. Here you have a choice of roads: take the less obvious right fork, which is a dirt road. This leads to Obsidian Bay where there is a sign that says “conservation area.” It took us about an hour to this point, including time for getting lost and taking plenty of photos. Follow the path here and look for a right turn and you will come to a wonderful new loop trail that leads out and around South Point, the southern most headland in Mustique.

From here  follow the old road up  to the east coast and head north along the trail. It is very wild and beautiful, with hundreds of barrel cactus and small plants bent to the wind. Tortoises became so commonplace that we stopping photographing them. The trail seems quite clear  now all the way to Pasture Bay.. From here you can walk back by road over the middle of the island to Britannia Bay .   You can also continue along the beach and over the headland to Macaroni Bay, which is great for swimming. (You cannot swim in Pasture Bay as the currents are too strong.)