From some angles Nevis looks like a sombrero, peaked in the center and low around the edges. Clouds usually cap Nevis Peak, which is over 3000 feet high. On occasion they cling to the summit and fall down the sides, looking just like snow. Some say this is why Columbus named it “Nuestra Senora del las Nieves” (Our Lady of the Snows), after one of his favorite churches. Early attempts were made to settle the island from St. Kitts in 1628. The first town, called Jamestown, was built near Fort Ashby, but it sank into the sea after an earthquake and tidal wave in 1680. Various battles between the British and the French hampered development until 1783, when Nevis became British for an extended time. It flourished as a plantocracy and there are many old plantations and sugar mills on the island. The old mills are crumbling, but the plantations have been converted into hotels where visitors can relive those gracious old days without the evils of slavery upon which they were built. Two historical figures associated with Nevis are Alexander Hamilton, who was born here, and Horatio Nelson, who married Nevisian widow Fanny Nisbet.

Nevis, with a population of around 12,000, is quiet and peaceful, with lovely views, picturesque houses and delightful people. Exploring the island is highly recommended. Nevisians have been careful to preserve their architectural heritage and many traditional Caribbean-style buildings survive.

The mountain is clad in dense forest and with a suitable guide you can make it all the way to the peak. The less energetic should visit the Golden Rock Estate, buy a trail map, and take a stroll or hike. Going at 1530 will give the best chance of seeing wild greenback monkeys. Return for tea in the majestic garden setting of the estate.

Several people lead historical, plantation tours, and forest tours. Information on these, bird books, and trail maps are all available at the Museum of Nevis in Hamilton House.

The anchorage at the north of town, just off Pinney’s Beach, is fabulous. A strip of pale ochre sand backed by beach vegetation continues for miles. Mt. Nevis ascends into the clouds behind. Gliding pelicans fold their wings and crash boldly in the sea. St. Kitts lying to the north, appears to be part of Nevis in a sweeping panorama. The Four Seasons Hotel on Pinney’s Beach makes a conspicuous landmark.

Port authority moorings have been laid all the way from Charlestown to Tamarind Bay. Visiting yachts should take one of these, rather than anchoring. 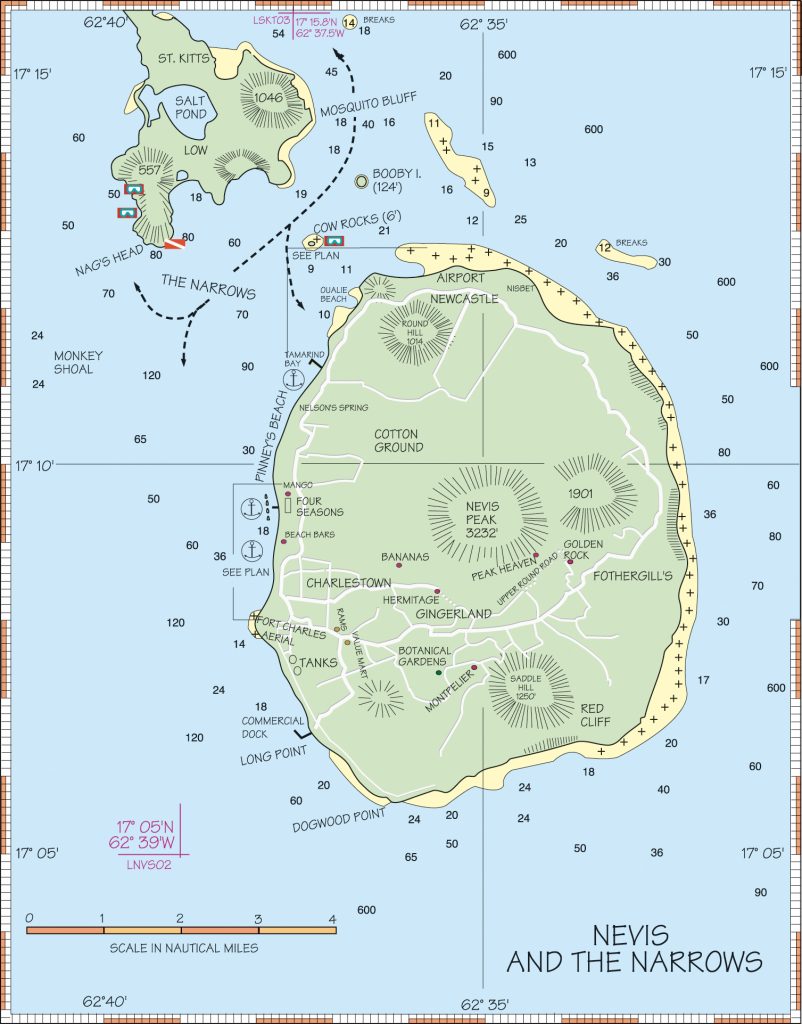