Saba looks like a fairy tale picture of a forbidden land. A mere 5 square miles, it reaches a lofty 3000 feet. Tall cliffs of red, pink, and brown rise almost vertically from the sea. Houses sit perched in seemingly impossible positions on the edges of precipices. Ashore, it lives up to its image, for, if there was ever a hidden Shangri-La in the Caribbean, it is Saba.

Until the early ’40s Saba was almost inaccessible. Everything had to come and go via Ladder Bay. This extraordinary landing on the leeward shore provides scant shelter from ocean swells. Some 800 steps are cut in the rock. The steepness of the steps and their elevation can be appreciated from the sea by looking at the old customs house, which is only half way up. Boats could only land when the sea was calm and even then men had to stand waist deep in water to handle the cargo. Everything from the outside had to be carried up, including, at different times, a piano and a bishop. The Sabans were able to prevent unwanted invasions by keeping piles of boulders stacked behind wooden supports that were cut down when attackers were half way up the hill. A road was built to Fort Bay in 1943, but with no port to shelter the bay, the island was still impossible to reach much of the time.

The 1500 inhabitants are descendants of hardy Dutch, Scottish, and English settlers, along with a few Africans who originally came as slaves. They have worked hard, side by side, to derive a decent living from this rugged land. They became great seafarers, fishermen, farmers, cobblers, boat builders, and, in more recent times, women have become skilled in lacework. Sabans take great pride in their work and are unimpressed by obstacles. The two main villages in Saba are Bottom and Windwardside.

Up until the 50s, the only way to get between the villages was to walk along a steep mountain track. Engineers came out from Holland and said the steep terrain precluded the possibility of a road. So Joseph Hassel, born in 1906, took a correspondence course in road building and the Saban people hand-built their road. It took them several years and was finished in 1958. Dutch engineers were similarly disparaging about the idea of an airport. The Sabans called in Remy de Haenen, a pilot from St. Barts. He looked over their one flat-topped rock and figured landing might be possible. The Sabans flattened the area as much as they could by hand, removing big rocks and filling in holes. Remy landed, proving the feasibility of flying in.

Today Sabans have their airport (it’s like landing on an aircraft carrier), a road to the sea, and a tiny harbor. Despite its lack of beaches, Saba attracts visitors. Some come to try the diving, rated among the Caribbean’s best. Others come for a glimpse of this remote island, which developed in isolation, away from the mainstream of Caribbean life. The first surprise is the beauty of the island. From the sea it looks like a rock, but up high in the hills the mountains and views are spectacular. The island is spotlessly clean, with villages of whitewashed red-roofed cottages that look like they were plucked from Europe sometime in the 19th century. There are cobblestone streets, low stone walls, and small stone churches. The people are honest, straightforward, industrious, and cheerful. They have a strong sense of community and there is very little crime. The facilities for the sick, aged, and handicapped are amazing, considering the small population. Many of the new projects have been carried out with aid from their mother country, the Netherlands, but every cent has been wisely used. The Saba community has a perfection all its own. Unique in the Caribbean, a tour of Saba should be high on your agenda. The hike to Mt. Scenery on a clear day offers totally awesome views.

Industries include a small amount of tourism, the mining of gravel and sand from one of the hillsides near Fort Bay, and a new international medical school whose students, when in residence, add about 30 percent to the population. This, plus the arrival of a few more visitors and the building of a few more hotels, has brought some changes: there are more shops and their stock is much more plentiful; restaurants are excellent and booming. There are even a couple of discos.

Saba is not the easiest of anchorages, though the addition of yacht moorings helps. Those who do not wish to visit by boat should consider going by air or ferry as a side trip. There are several flights a day from St. Martin, and you can make it by ferry as a day-trip. 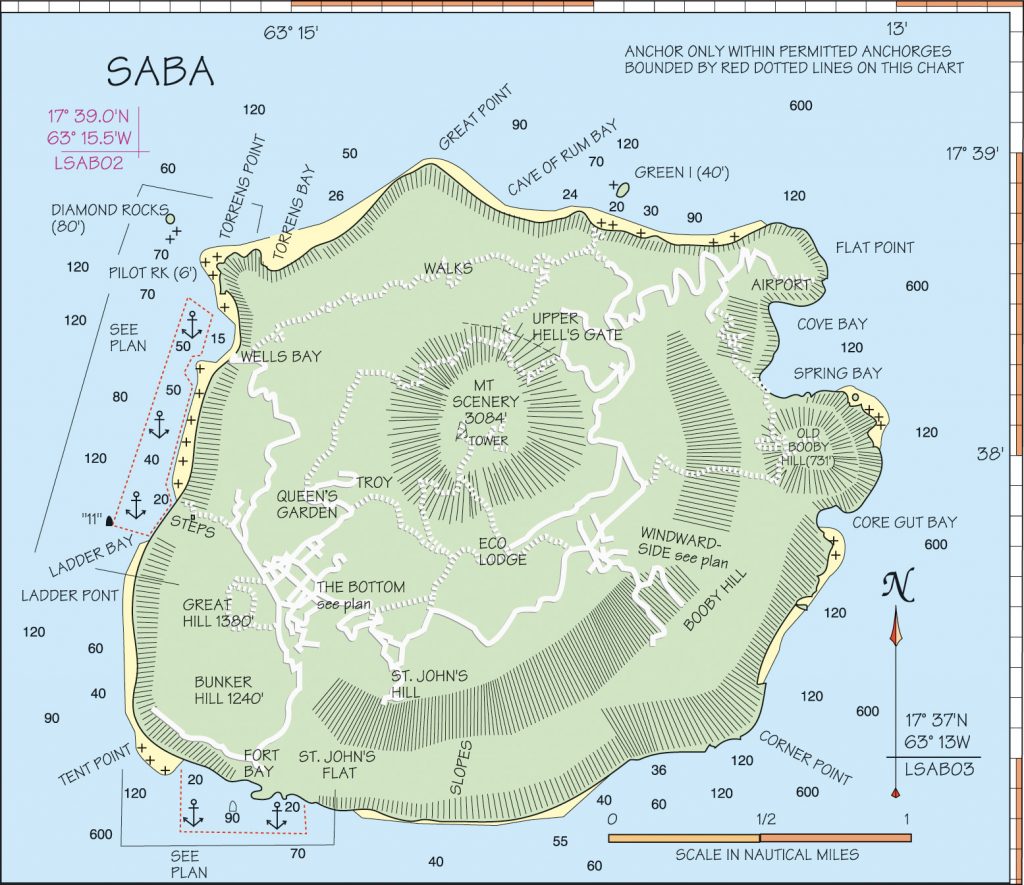 The Sea and Learn Program