Tobago is a little out of the mainstream of the other Caribbean Islands. Too far to sail in a day and too often a struggle against wind and current, it is less popular than the islands to the north. However, for the adventurous sailor the extra effort required is amply rewarded by a visit to one of the last unspoiled Caribbean islands.

This small (116 sq. miles), mountainous island has lovely beaches and green hills. With a population of only 47,000, it does not feel in the least bit crowded. Long used as a holiday place for Trinidadians, Tobago has a low key but expanding tourist industry. Fishing is important and much of the catch comes from seine netting. When anchoring in Tobago, you need to consider the needs of the fishermen.

Tobago changed hands more times than any other Caribbean island between Dutch, English, Courlanders, and French, and the count is sometimes 24 times, sometimes as high as 31 times. This figure is vague because for many years no country had a firm grip on Tobago and a change in administration was hardly noticeable. (Who’s counting?) Possibly spotted by Columbus in 1498, there was no permanent settlement for over 150 years. Carib raids and disease ended a Dutch settlement which was established in 1628. Later, colonists of various nationalities periodically laid waste to each other’s settlements, which disrupted the pirates operating in the area. The Duke of Courland (now part of Latvia) was very persistent in trying to exercise sovereignty over the island, which had been given to him as a birthday present by his godfather, King Charles II of England.

By 1771, English colonists were using slaves to grow and harvest sugar cane. After an infestation of ants destroyed the cane, the settlers tried cotton. In 1781 the French took the island over for 12 years and made serious attempts to develop Tobago’s economy, still using slave labor to grow both sugar and cotton. After the British regained control in 1793 they remained in power with only a slight interruption until Trinidad and Tobago became an independent country in 1962. Tobago was united with Trinidad in 1899, after its economy had totally collapsed and no one knew what to with it.

Today tourism is developing at an expanding rate. One of the largest new projects is the Angostura-built Tobago Plantations, which includes a Hilton hotel, a golf course, and lots of residential properties. So far, however, Tobago is not what you would call a touristy island. There are no international chain stores and, with the exception of the major hotels, businesses that cater to visitors are very individualistic, and sometimes charmingly quirky.

For those visiting on yachts, anchorages are dotted all around the island. The west and north coast have the most anchorages, but the capital, Scarborough is on the south coast as is King’s Bay. Anse Bateau is also an excellent anchorage on the east coast. The north coast anchorages are somewhat susceptible to northerly swells and strong northeasterly winds. The best time to visit is in spring when the chances of these conditions become very low.

Yacht services are provided by Store Bay Marine Services in Store Bay, if they are still in business. I notice their web page has gone and the last post on their facebook page was a year ago. 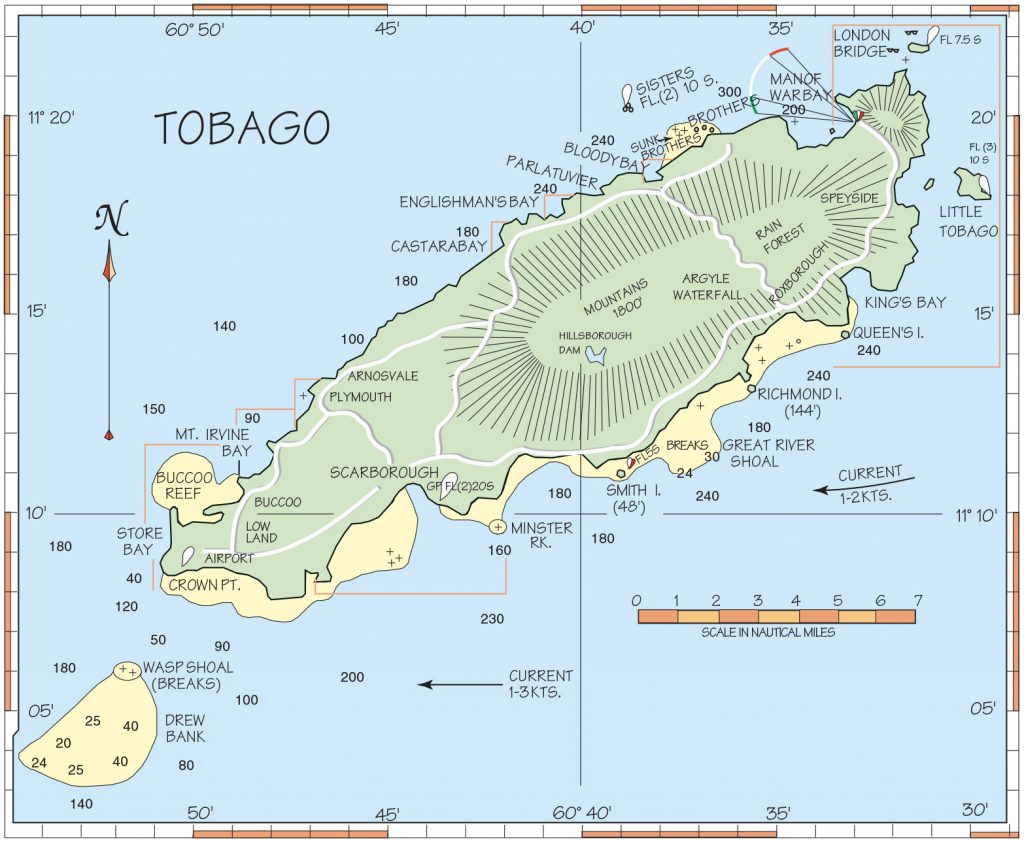