They say that when Columbus discovered Trinidad he stumbled into a big party. Today, Trinidadians are a fun loving, hospitable people who do indeed love partying. Steel pan music was invented here, a by-product of the oil industry, and its discarded oil drums. Calypso, too, had its birth in Trinidad. These musical forms combine to help make Trinidad’s carnival the world’s finest celebration.

Trinidad seems to reach out and almost touch Venezuela. The two were linked together only 11,000 years ago when the last ice age lowered the sea by 300 feet. It shares a rich diversity of plants, birds, and insects with the South American continent. There are also some species that are unique to Trinidad. South American Indians inhabited Trinidad when Columbus arrived in 1498. The early Spanish colonization in 1776 was not successful as the Spanish were doing too well plundering South America to get too interested in Trinidad. Governor Chacon then offered free land to all comers, and the colonization of Trinidad got under way with help from many French settlers. Port of Spain became the main town.

The British captured Trinidad and Tobago in 1797 and held the two islands until independence. In the early days Trinidad had a flourishing plantation economy based on sugar. The plantocracy found itself short of labor after the abolition of slavery, when former slaves quite naturally wanted no part of working on the plantations. The landowners’ solution to the problem was to import some 150,000 indentured servants from India. Today Trinidad’s population is a blend of Indians, Africans, and Europeans; a mix that has generated some exceptionally good looking people. Trinidad has a population of 1.2 million, about 350,000 of whom live in Port of Spain. Trinidad and Tobago became an independent twin-island state in 1962, a democracy in the British tradition.

During the last world war the United States established major naval and air bases in Trinidad. They served to protect oil shipments to England, which were prime targets for German U-boats. Trinidad has the good fortune to have large oil deposits and a pitch lake. As a result it is more industrialized than the rest of the Caribbean and produces, among other things, steel and ammonia, which are exported, along with oil and natural gas. Shipbuilding and major construction are undertaken.

Trinidad is modern. It has large shopping malls, similar to those in the USA and good roads. Over the last few years Trinidad made a deliberate and successful bid to become the haul out and service center for yachts in the Lesser Antilles with a marine industry based in the Chaguaramas National Park. Trinidadians built many boatyards and marinas and developed so many services that there are over a hundred in the Chaguaramas area alone. This has put it firmly on the map for cruising people, or yachties as they are locally called.

Many come to haul out but stay to discover another side of Trinidad; an island whose exotic and flamboyant nature includes rain forests and swamps with monkeys, parrots, macaws, manatees and giant leatherback turtles. They discovered too, one of the most fun-loving and hospitable people in the Caribbean whose Carnival is considered by many to be the best in the world. When the fun got too much, they found, as Trinidadians have long known, that a week or two in Tobago is the perfect way to relax.

Trinidad also has several out-of-the-way anchorages. These make perfect getaways for a few days of peace and quiet. Many of these offer great hiking for the adventurous. 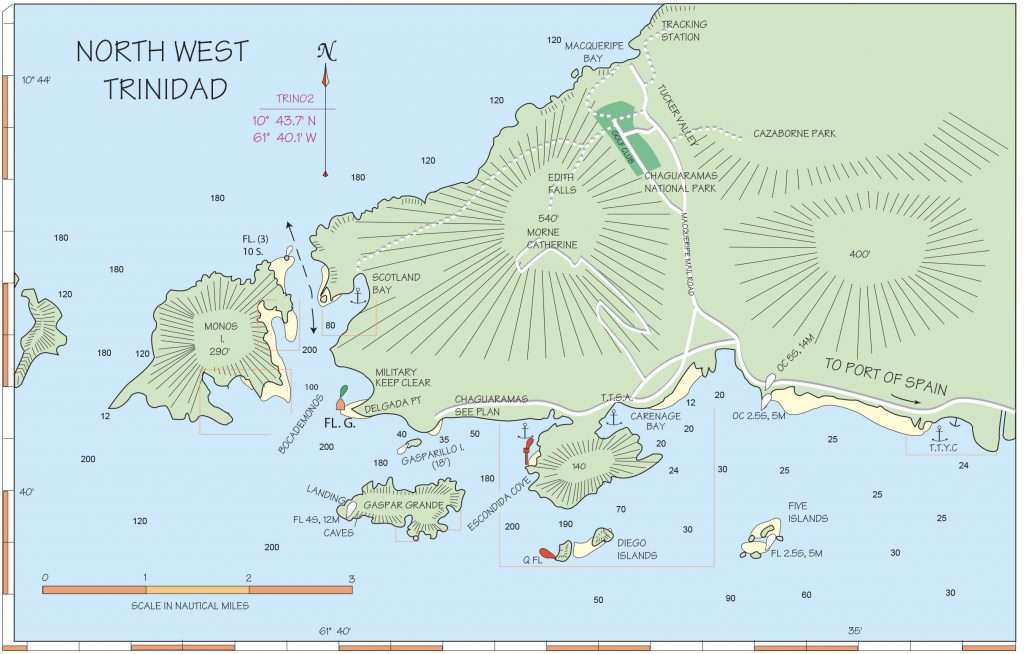