Bequia, the largest of St. Vincent’s Grenadines, has long been a favorite of yachtspeople. Isolated enough to remain relatively unspoiled, yet lively enough to be stimulating and entertaining, it provides a blend of the old and new that many find perfect. It is well connected to St. Vincent and the other Grenadines both by the new airport and by the cheaper and more traditional ferries. The Admiral makes four trips a day on weekdays: the first ferry normally leaves Bequia at 0630 and the last returns at 1900. Some yachtspeople leave their boats anchored in Bequia and take a ferry over to visit St. Vincent. Check the free Caribbean Compass newspaper or the tourist office behind the main dock for the latest ferry schedule. The traditional sailing schooner Friendship Rose which served as the Bequia ferry for many years, has now been refitted as a charter boat.

Bequia is an island of sailors and boats, linked to the outside world mainly by the sea. The old traditions continue. Boats are built on the beach in the shade of palm trees. Everything from little “two bow” fishing boats to grand schooners are built by eye, using only simple hand tools. A big launching is always a festive occasion, with rum flowing freely, music playing and hundreds of brightly dressed people helping to roll the boat down the beach into the sea. Bequians travel all over the world on cargo vessels, and quite a few have ended up owning their own. Some are intrepid fishermen who venture all over the Grenadines in little open boats. While the tradition of fishing under sail has all but died out, it has been replaced by a new one – racing sports fishing boats, either genuine old ones, or new, higher-tech ones based on the same concept.

The island has an active whaling station in a low-key and very traditional way. By IWC agreement, local whalers can take four whales a year, and in some years they do not get any. The whaling season is between February and April. At this time of year humpback whales leave their northern feeding grounds and head south to mate and bear young. Few people are left in Bequia with the skills necessary to hunt them ~ a daring feat in an open sailing boat, using hand thrown harpoons. On the rare occasions that they make a kill, the hunters tow the whale to Semplers Cay for butchering.

Bequians are a proud people, descendants of settlers who came from North America on whaling boats, from farms in Scotland, from France as freebooters and from Africa.

Bequia?s main harbor is Admiralty Bay. There is a harbor on the south coast called Friendship Bay and a daytime anchorage at Petit Nevis.

Admiralty Bay is a huge, well-protected bay with Bequia?s town, Port Elizabeth, at its head. Small hotels, bars, restaurants and shops spread from town along the southeastern shore, strung together by a tiny path along the beach. Good dinghy docks are spaced around the bay. 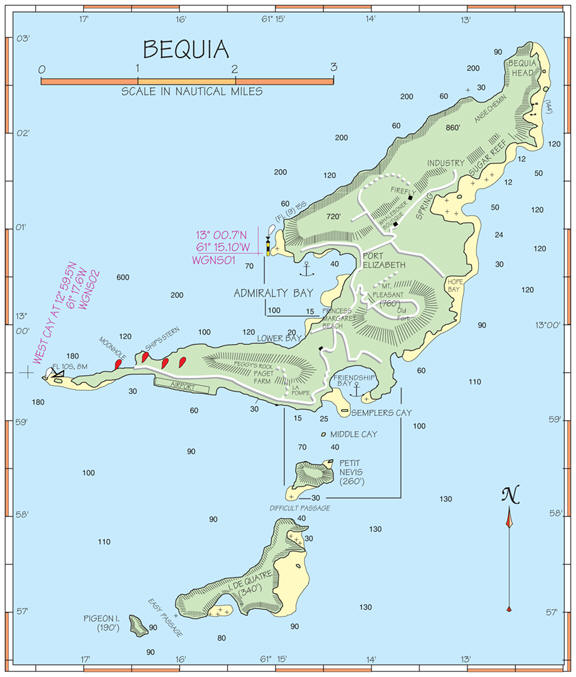