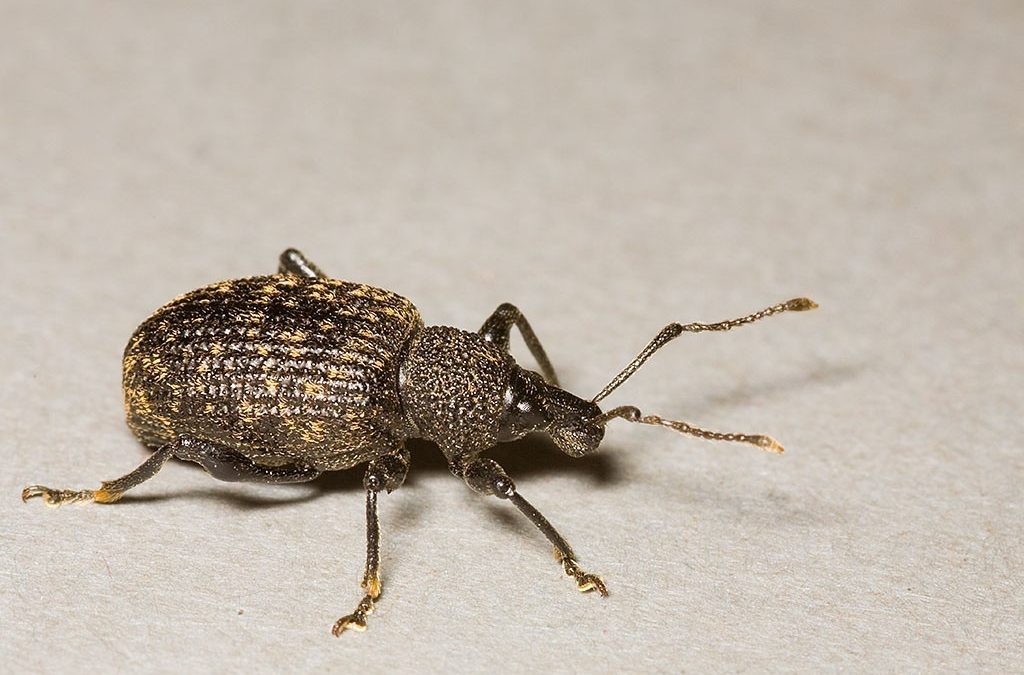 At various times I have had boats invaded by cockroaches, ants and rats, but none quite prepared me for the Week of the Weevils. It all started when Ben, a friend of mine who came sailing for the first time, lightheartedly complained that he had not had the pleasure of tapping weevils out of his hard tack. Like many new to sailing, he imagined boat life would be true to a Patrick O?Brian novel. A while later, I noticed a couple of weevils on the floor. Ben left and my partner Ginny arrived, and while this happened the weevils multiplied. We started seeing many dozens of them on the floor, on walls, and inside lockers.

It has to be said weevils are not the most obnoxious of guests ? they don?t sting, there are no vampire weevils, and unlike cockroaches, they do not scurry, or wait till dark to creep out. They mainly walk sedately or just stand quietly looking bemused. We stared off squishing them, but neither of us particularly liked the little crunch, and there were too many to give each one so much individual attention. With the aid of dustpan and brush and mini-vacuum they were easy to remove them from the surfaces from whence we gave them a major life decision; swim ashore or drown. But however many we removed, within a few hours there would be more. All my basics like flour and rice are in sealed containers, we checked them ? no weevils. We emptied a locker or two where the density seemed worst, nothing.

It was like they were spontaneously generating from nowhere. Strangely enough scientific thought before Darwin hypothesized that frogs could arise spontaneously from mud, and Linneaus himself thought that in winter swallows somehow disappeared into the reeds beside rivers to emerge in spring. But to even think this way today is sheer folly and leads on the sure path to madness wherein you start babbling about intelligent design like members of the Discovery Institute and start calling your biologist friends ?Darwinists?; a sure qualification to get voted you onto a school board in Florida, Kansas or Texas. No there had to be a better way. Luckily at this point the weevils had not eaten, carried away or taken up residence in the computer, so we cornered a sample weevil and googled him. Maybe it would be a boll weevil, at least then I could imagine myself in a Woodie Guthrie song.

They were not boll weevils, but they looked very like rice weevils, but they could have also been wheat weevils, or damn near any other kind of grain-eating weevil ? telling the difference between this sub-group of weevil species is not for the amateur. But here was the interesting thing we learned; weevils typically use one unit of their preferred food to produce a young. They lay many eggs, but only one say, per rice grain. The larva eats up the inside of the grain and makes a hole in the husk, metamorphoses to an adult weevil and emerges in search of sex, rock ?n roll and more rice. Now if they were indeed not spontaneously generating, this would mean that we would have to have quite a big stash of something from which they were emerging ? we had taken hundreds of them for their first swimming lesson.

Ginny had determined the largest concentration was in the workshop; it was a hotspot, there were even a bunch in the tiny bilge among the transducers. ?I think?, said Ginny ?it is something you bought back on your bike?. My bike sits on the floor in a big nylon bag close to the worst concentration of weevils. This seems to me unlikely, I mean a few grains of rice stuck in the treads yes, but hundreds; hardly. Also, just in case she was right I had sprayed a quick dose of Baygon in the bag a couple of days before, it made no difference. Still, in the interests of science we pulled the bike out into the cockpit and open the bag; it was weevil-free.

By luck I pulled an old mug out the dim recesses of a locker and found a few dead weevils inside. This is a locker we had looked in before, but not really cleaned ? now was the time. Out came dozens of little sealed containers until all that was left was an untidy stack of bowls in the back. There between the nested bowls was a plastic bag of split peas. The bag was crawling, each split pea had a hole, and the plastic bag had hundreds of holes. Interestingly they dispersed fast, so the locker itself was not crawling that badly. When in search of bowl weevils, next time we will check the bowls first.