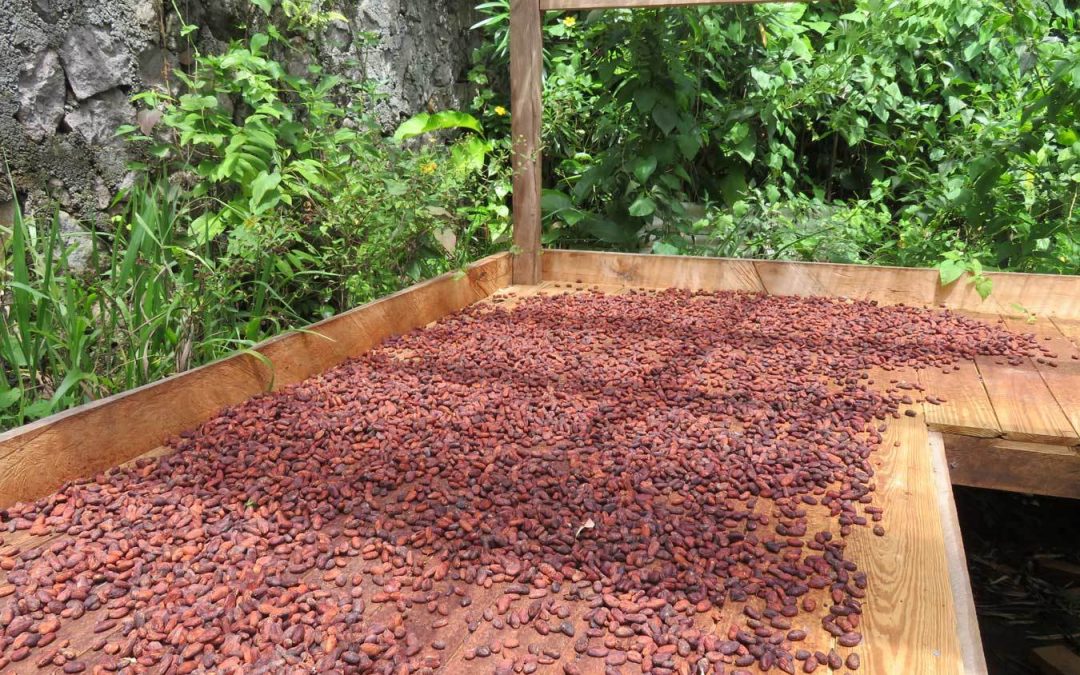 After a hike in the Syndicate Forest, my companions and I stopped at the IGA supermarket near the Ross medical school. I spied bars of chocolate wrapped in plastic with a decorative label: ?Pointe Baptiste Estate, Dark Chocolate 80%?. In small print at the bottom it said ?Producer: Alan Napier, Calibishe.? ?I bought two and, being hungry after hours of hiking, opened one and offered it around. It was wonderful.

If you stand on the eastern part of red rocks at Pointe Baptiste, Calibishe and look back to the land, you will see a small darkish beach, a steep hill, and a house just peeking over the top of the vegetation. This house is part of the 25-acre Pointe Baptiste Estate and it was built by Elma and Lennox Napier in 1934. Elma is an iconic figure in Dominica, featured on a postage stamp for being the first woman ever elected to a legislative council, not only in Dominica, but in the entire British West Indies. Lennox was on the council first, but after his death in 1940, she took over the seat. In those days a road of sorts ran from Portsmouth through Calibishe to Marigot, and a road network surrounded Roseau and the south, but nothing linked the two. To travel from one to the other the best option was the government launch. One of Elma?s political achievements was the building of a road linking the two halves. Today you can drive from Portsmouth to Calibishe in about 20 minutes ? In 1932 it was an hour and half ride on a rickety bus. One of the more interesting governors she served under was Arthur Grimble, who wrote a notable book ?Pattern of Islands? about his time in the Pacific, and with whom she became a good friend.

Elma was born in Scotland in 1892, the eldest child of Sir William Cumming, a family both aristocratic and rich. She was born a rebel, did not like that women were treated as less important than men, and fell in love with a married man, breaking many taboos, before settling down with respectable international businessman, Maurice Gibbs. With him, she had two children, Daphne and Ronald, and lived some time in Australia, where she loved riding horses. Her life turned around when she met Lennox Napier, a businessman but also a bohemian, with somewhat radical politics, interested in art and literature, a man who had travelled and fallen in love with Tahiti and its simple life style. With Lennox, Elma did not have to adapt, she could be herself. In a major and, in that era (1924), scandalous, step she divorced Maurice and married Lennox. They fell in love with Dominica during a Caribbean sojourn for Lennox?s health.?

They bought land and started a new life here with their children, Patricia and Michael, and Elma?s daughter by her earlier marriage, Daphne. (Ronald, stayed in England, became a pilot and was killed in action in the Second World War). ?This story is beautifully told in her book Black and White Sands, available on Amazon. It includes details of the building of the house. To oversee the work they started by camping in a round thatched shelter, while they built a small cottage where they could live while the house was being built. The wooden frame and tongue-and-groove wood for the main house was prefabricated in Roseau and sailed to Point Baptiste on a local sloop, which anchored offshore. The first parts were rafted ashore by local boats, but after a pay dispute, the rest was dumped in the sea and allowed to drift ashore. Everything was carried up the hill by hand.

Elma and Lennox were liberal and bohemian, unlike most of white Dominican society at this time. (In Black and White Sands, Elma writes about the arrival of the Methodist minister who was directed to the beach to find them: ?Four Napiers, sunbathing in the nude were eventually made aware of his presence by a series of discreet coughs.?)

They were rich, aristocratic, and well-travelled, with many friends, and their house, especially the grand 70-foot balcony with its view out to sea, became a magnet for visitors of all kinds, from humble locals to luminaries such as Somerset Maugham, Alec Waugh, Jean Rhys, Peter Fleming, and Noel Coward, along with the occasional royal.?Elma and Lennox also fell in love with what is today another popular visitor site, Chaudiere Pool. They bought the surrounding land to help conserve it, and built a house there*.

Daphne and Patricia stayed in Dominica, married and settled down. Patricia married Ted Honychurch and their son Lennox is Dominica?s best known historian. He orchestrated the restoration of Fort Shirley at the Cabrits Marine Park.

Michael went off to study in England, and although he returned for holidays, he did not live again in Dominica. When Elma died in 1973, Point Baptiste Estate was left to him, and he turned it into a guest house.

Michael?s son, Alan, first visited Pointe Baptiste when he was 6 months old with his father and mother, Josette. It was the first of many holiday visits when he would enjoy the red rocks, the black and white beaches, and the rivers and forest around his grandmother?s home. On one visit, he stayed a whole year with his grandmother. After she died, he returned each year with his father when their holidays became more like working parties trying to keep up with maintenance on the aging property. He formed a lasting bond with the area, one that would prove stronger than his ties to England, the country of his birth, or to any of the exotic places he had visited, including Turkey, Italy, India, Austria, and Jordan.

In 2008, Alan returned to Dominica to live and to maintain and run the historic Pointe Baptiste Estate. The relaxed atmosphere suits him perfectly. Like Elma and Lennox, who bought Chaudiere Pool to help preserve the area, Alan believes in conservation and organic farming. Unlike his grandmother, who declared herself so poor at gardening ?even people I employ fail to make anything grow? and that ?I found myself among those whose rabbits practice birth control, whose goat strangles itself…,? Alan is adept at making things grow and keeps wonderful gardens, both for decoration and food, including organic cocoa. Not satisfied with the locally available chocolate, he started making his own.

Even though you will see his bars for sale in a few supermarkets and cafes, this is, at the moment, a very small scale operation, producing only about 60 bars every three days, mostly in the kitchen, and provided the machinery is working.

I visited with Bequia artist Pinky Vaughan-Richards, Anne Vanderhoof, the food writer and author of Embarrassment of Mangoes and The Spice Necklace, and her partner Steve Manley. We were taken there by Paul driving the Providence taxi. Paul was a good choice because he visits often and loves the chocolate.

We emerged from the closed interior of the bus into a lovely garden of a hundred shades of green, interspersed with splashes of bright color. Tall trees provide shade and homes for branches full of epiphytes.? Alan emerged from the bush, blond beard and slightly unruly hair, barefooted, and bare chested, wearing beige shorts held up with long belt whose dangling end gave him a somewhat piratical look – if you can imagine a pirate with no more malice than a friendly teddy bear. ?

Alan welcomed us and we were taken on a spectacular tour through the gardens, past brilliant orange and mauve bougainvillea merging into the blue sea, and into the great house where a neighbor had an exhibition of paintings and photos.

In the chocolate house, Alan showed us his very basic equipment: a gas ring for roasting the cocoa, a tiny grinding machine for turning it into paste ? a household machine built for making dahl in India and strengthened commercially to take the greater strains of making chocolate. Using a household press, he squeezes out the cocoa butter, needed for enriching the chocolate, leaving a rich cocoa for making the drink. Outside we visited the tiny cocoa drying station, and the boxes used for fermenting the beans. Alan grows some of his own cocoa and when he needs more, he buys it from neighboring farms. Having bought and enjoyed the 80 percent chocolate, I was astonished to find he produces all kinds of flavors, some suggested to him by customers: mint, ginger, candied ginger, spice, hot pepper, tangerine, coffee, lemon grass, crunch bar (with roasted chocolate flakes like the Nibulicious in Grenada), and even a milk chocolate bar. We sampled these with great delight.

We bought a stack of chocolate bars and left happy. This was my most exciting chocolate tour since the Grenada Chocolate factory. Alan welcomes visitors. Call to make sure the time is convenient (1-767-225-5378). He also rents a lovely cottage (the same one that Elma and Lennox built and stayed in with their kids, while the main house was under construction). Alan has kept the whole estate much as it was in the time of his grandparents, although modern conveniences such as electricity have been added. ?For chocolate lovers there is good news. Alan is working on a new building for his chocolate production. He will be buying a larger chocolate grinder, and increasing production, which will mean more delicious chocolate for all of us.

*Some vestiges of the old house foundation may be seen, but the house itself was abandoned and rotted into the forest when the new owner bought the land. Any useful bits were recycled by locals when they realized the new owner had no interest in it.