Anguilla is a low island surrounded by spectacular white sand beaches and banks of coral. For the most part it has a wonderful sense of peace and the people are outstandingly friendly and honest. However, development is continuing apace, lots of cars are being imported, so to find the peace you now have to get off the main roads. The population of 12,000 relies on tourism as the major industry.

The tourist boom has bought with it a rash of building, with styles varying from rectangular concrete boxes to the elaborately grandiose in many flavors. Here and there, but getting rarer, you come across a traditional old Anguillan house; they stand out as very pleasing to the eye in their simplicity and elegance.

The two main visitor activities in Anguilla are beaches and eating out. As a consequence Anguilla has many really excellent restaurants .

In 1967, Britain lumped Anguilla with St. Kitts and Nevis and made them an autonomous state. This awkward parceling conveniently filed them away for the British Colonial Office, but ignored both the social and geographical realities. Anguillans were dead set against this arrangement and wanted to remain with England. They rebelled against the rule of St. Kitts. Premiere Bradshaw who told them he “would show them who was boss” and threatened to “turn Anguilla into a desert.” An amazing armed rebellion followed in which there were only minor casualties and no fatalities. The Anguillan rebels would open fire on the police station, manned from St. Kitts, at all hours of the night or day until the police were quite unnerved. A large armed crowd then gave the police an ultimatum to leave the island and they blocked the runway to stop reinforcements from arriving.

The Anguillans, fearing an armed invasion from St. Kitts, decided to take the offensive and invade St. Kitts themselves. A small boatload of men went there, aided by two American mercenaries. The invasion was a complete fiasco. A big hole got blown in the ground near the defense force headquarters and there was a shoot-out at a police station. There were no casualties. However, after that no one in St. Kitts really wanted to mess with the Anguillans. Several Americans thought up fancy schemes to help the Anguillans finance their island, and, in 1969, Britain, under the mistaken impression the island had been taken over by the Mafia, invaded. Armed men waded ashore onto the beaches to be met by goats and curious small boys. After the embarrassment died down, Anguillans got what they wanted and are again administered by the British.

Road Bay, the main anchorage in Anguilla, is a charming village set on a lovely beach. The sail to and from St. Martin is usually a pleasant haul over turquoise water. From Road Bay you can visit other anchorages along Anguilla’s south and north coasts, as well as making day stops offshore at Sandy Island, Dog Island, and Prickly Pear Cays.

The Anguilla Sailing Association runs the annual Anguilla regatta during the second weekend in May. It is fun, with Anguilla racing boats, visiting yachts, and the 12-meter fleet from St. Martin. They also organize the Anguilla Youth Sailing Club, which teaches local kids to sail. So far they have eight Optimists and a J-24. The sailing program is open to everyone, with scholarships for those that cannot afford it. In this endeavor they have had support from local businesses all over Anguilla, including those in Sandy Ground. 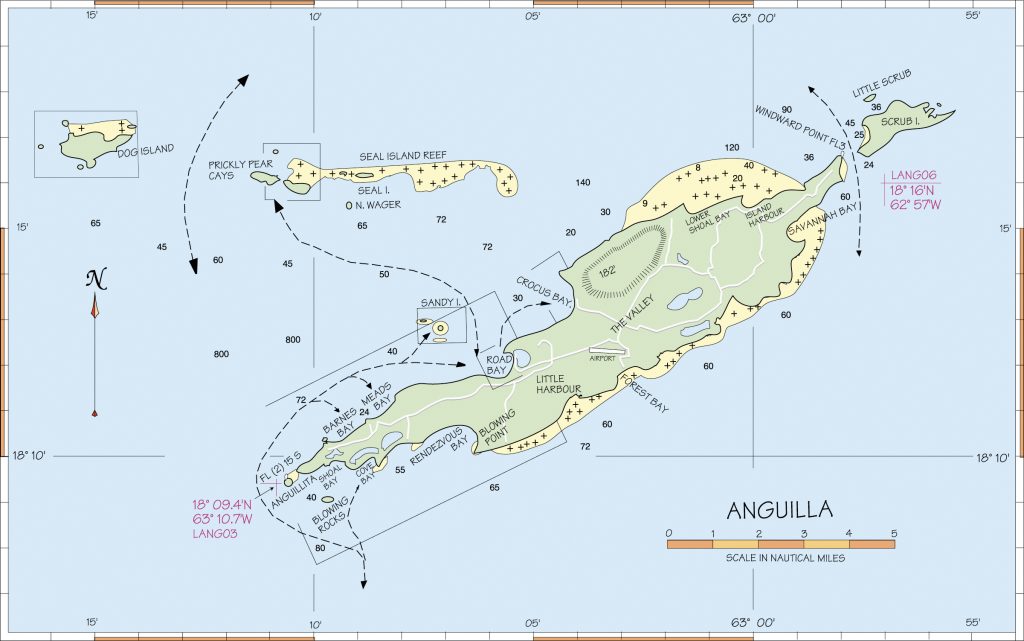