St. Vincent and the Grenadines is an irresistible archipelago country offering some of the most exciting cruising in the Caribbean. St. Vincent is by far the largest island of this group, though each of the major Grenadine islands has its own page on this site.

St. Vincent is an island of towering mountains, craggy peaks, and dramatic precipices. Everything is dressed in a tangle of dense green forest. St. Vincent’s steep and wild terrain was among the last to be settled by Europeans. At the time Columbus sailed through the islands, St. Vincent was inhabited by the Kalinargo. They had migrated from South America and had a more poetic name for the island; Hairoun, which means “home of the blessed.” They were a fierce tribe and had wrested the land from the Arawak people who preceded them. Columbus called them Caribs.

While the newly arrived Europeans exploited nearby islands, a slave ship was wrecked off Bequia and the Caribs took the slaves as their own. However, these slaves were also fierce and warlike and proved to be a problem. To combat this, the Caribs decided to kill all the young male black children. This caused a revolt among the slaves, who killed all the Caribs they could, stole their women, and ran into the hills. They kept the names the Caribs had given them, followed some Carib customs, and became known as the Black Caribs. Over the years they took control of much of the land from the original Caribs and put up intense resistance to British settlement. Finally, in the late 18th century, the Black Caribs were defeated by a superior British force and shipped en masse to Honduras, where they are also known as Garifunas.

The northern end of the island is dominated by Soufriere, a 3,000-foot volcano. A friend of mine was anchored under the volcano in April 1979 with an amateur geologist on board. Together they scaled the volcano and peered into the depths. The geologist declared it safely dormant. That night, which happened to be both Friday the 13th and Good Friday, there was a rumbling from the very bowels of the earth and the volcano erupted with a massive cloud that landed dust hundreds of miles away. It created murk in the area so thick they couldn’t see to the bow of the boat and had to leave completely blind, steering by compass to get away. The eruption, which lasted for some days, was Soufriere’s second since 1902. The other was in 1973. As you sail by you can see some rivers of dark volcanic matter that flowed down from the summit. Despite the absence of any warning, everyone left soon after the first eruption and there were no casualties.

The enthusiastic should hike up Soufriere, as it is unquestionably one of the Windwards’ best and most exciting hikes. Starting on the windward side, there is a clear trail that begins in farmland and goes through rainforest, montane forest, and then into an area where only tiny plants can survive. The mountain top is often in cloud, and you need a little luck to see down into the crater or get the views over the island. The wind often blows hard, and it is cool and damp, so take a rain jacket. Be careful not to get blown into the crater, which is a sheer 1,000-foot drop with no guardrail. Take lunch with you and eat it near the top; the longer you spend there, the more likely you are to get windows in the clouds and be able to see into the crater. The crater is an impressive cone with a huge, growing, smoking volcanic dome in the middle. The crater rim is at 3,000 feet; the mountains to the north attain 3,800 feet. The volcano can be approached from the leeward side, but it is a much longer hike (about four hours each way) and a reliable guide is essential.

In Blue Lagoon, at the southern end of St. Vincent, the delightfully refurbished Blue Lagoon Hotel and Marina is a wonderful and welcoming place to stay and enjoy the surrounding country. You can clear customs here and three restaurants are right there with many more within dinghy range down to Young Island Cut.

While here, visit, and spend a couple of hours in Montreal Gardens, owned an run by Tim Vaughan. Tim takes the botanical garden into an art form, and this is surely the most spectacular garden in the eastern Caribbean.

St. Vincent has several beautiful anchorages. Cumberland Bay, Wallilabou and Petit Byahaut are all in wild and wonderful countryside. The capital is Kingstown, which has a cruise ship dock. 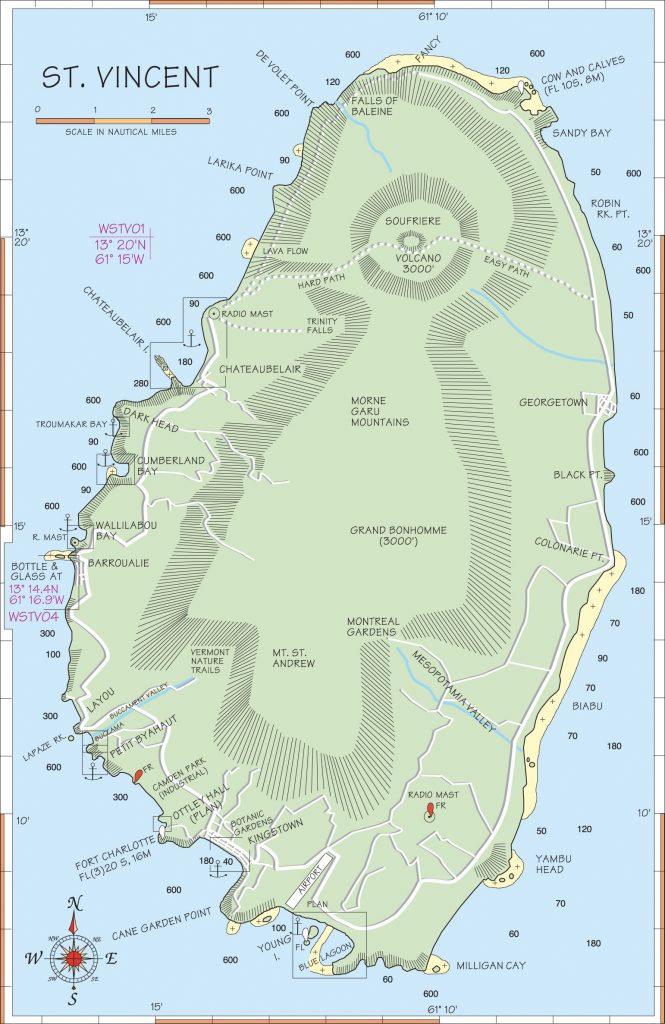