Sadly, on September 7th 2017 Hurricane Irma swept through St. Martin. Although damage to both marine and shore-based infrastructure was significant, all bridges are now operational and most businesses are back up and running. You can visit, but watch out carefully for wrecks, especially on the French side of the lagoon, as removal is not far along.

Although this island is barely 7 miles in each direction, it is perhaps the best known holiday destination in the Leewards. It is blessed with a multitude of superb white sand beaches, backed by pleasantly scenic hills. Its fame has come from the way it has embraced tourism wholeheartedly with casinos, condominiums, and scores of hotels. The whole island is one duty-free shopping plaza. Shopping is not restricted to cruise ship passengers. Two of the Caribbean’s biggest chandleries are based here: Budget Marine and Island Water World. With the help of their customers, they have generated enough buying power to be able to offer excellent prices to yachts. Their catalogue prices are a little higher than some US discount prices, but in duty-free St. Martin a further ten percent discount for cash in normal, and you can often negotiate more substantial discounts, depending on the items ordered and how much you are spending.

St. Martin is divided across the middle. The northern part is French; the southern part Dutch. There is a charming story, completely unsupported by historical fact, that the French and Dutch were so civilized that, rather than fight over the island, they had a Frenchman armed with a bottle of wine walk in one direction and a Dutchman equipped with a flask of gin take the other. Where they met became the boundary, and the French ended up with a bit more because the gin was stronger than the wine.

In the early days the island was important to the Dutch because of the salt ponds in the southern part, which is why they settled that half. St. Martin was successful for a time as a producer of tobacco, and then of sugar. With the collapse of the sugar market, it started a long decline. In 1939 an attempt was made to halt this downward trend by making the island completely duty-free.

The strategy worked, and St. Martin slowly became the Caribbean’s number one shopping mall. Today it thrives, with about a million visitors annually. Hotels are everywhere, cruise ships call daily, and there are many hundreds of duty-free shops and restaurants, as well as over a dozen casinos. The current boom has created so much work that many cruising yachtspeople have found temporary jobs here.

n recent times, this island has become the Caribbean’s major destinations for power superyachts. They make a magnificent show in the winter season, especially at bridge opening time, when they follow one another into the lagoon in majestic line.

There are excellent facilities for most kinds of yacht work, and since the island is small, it doesn’t really matter where you are. Technicians are used to visiting by car.

The Dutch side has the excellent Sint Maarten Yacht Club, which organizes many races, which can help the cruising sailor get to know the local yachting community. They are right next to the bridge with a good dinghy dock. Wander in ask Petra Gilders for the racing and social program. They also have a very active youth sailing program. If you are staying a while, join the club; your kids can enjoy the youth fun.

The Heineken Regatta is on the first full weekend in March, a world-famous international event that draws many famous yachts. Perhaps the best cruising regatta is the Course D’Alliance, a three-day race in November from St. Martin to St. Barts, then Anguilla. Or maybe it is the Offshore Regatta which goes to Statia and Nevis in June. If you have a cat you can join in the multihull regatta in March. There are many events, including informal races year round, so wander in and ask. You can also look at their website: www.smyc.com.

Marine parks exist on both sides. Yachts can anchor or pick up a mooring in all their usual haunts. Fishing, including spearfishing, is not allowed near any of the popular dive sites, including most of the offshore islands and rocks. Moorings for divers and snorkelers have been laid on many of the sites. These are not for yachts, though yacht moorings are planned. The French marine park goes from Oyster Pond to Roche Creole, but excludes much of Orient Bay. Fishing, taking of anything, polluting, jet skiing, and water-skiing are all banned within this area.

St. Martin has good medical and dental facilities. A good clinic, easily accessible to the yachts, is in the complex by Simpson Bay Marina. Check with Dr. Datema or Dr. Ubbo Tjaden. You will also find a modern dental clinic with dentists, hygienists, and an orthodontist.

Both the French and the Dutch have emergency lifeboats, from a rigid inflatable to an ocean-going rescue vessel. Call VHF: 16 or dial 911. 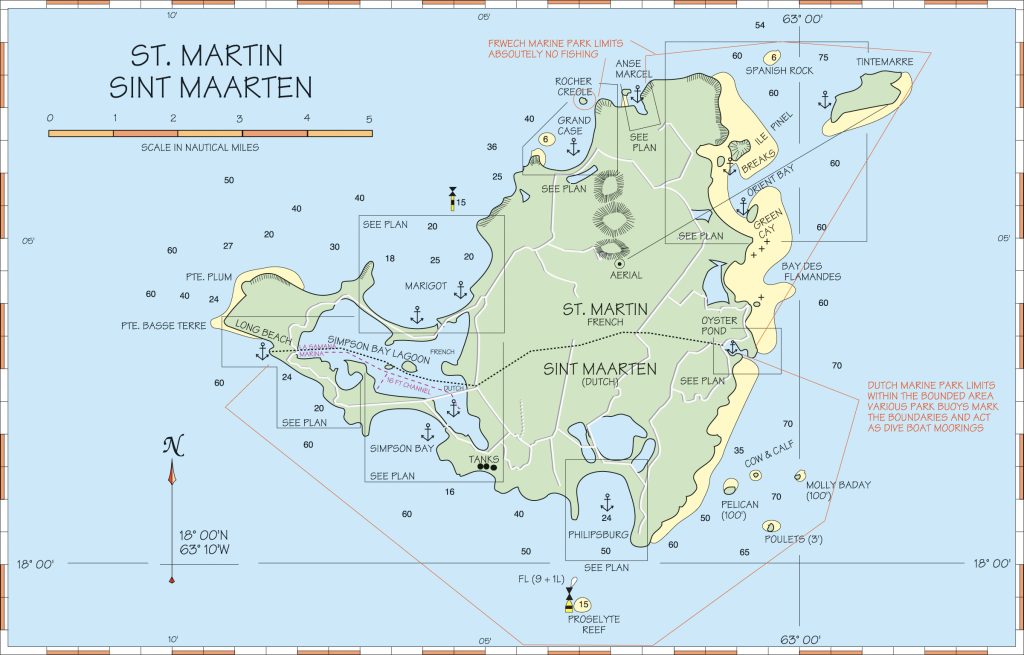