It is said: “If Columbus came back today, Dominica is the only island he would recognize” This is because Dominica is the region’s most unspoiled country and its most exciting destination for spectacular natural beauty. When Christopher Columbus was before King Ferdinand and Queen Isabella of Spain, trying to describe the awe-inspiring mountains of Dominica, he had to resort to crumpling up a sheet of paper to illustrate the dramatic form of the land, with its valleys, gorges, and pinnacles. This gives an idea of its topography, but tells nothing of its amazingly lush vegetation. Greenery erupts everywhere, thrusting upwards, curling, stretching, climbing, and falling, till the whole land is covered in a verdant tangle of trees, vines, shrubs, and ferns. Add to this a plethora of birds, butterflies, and brightly-colored flowers, and you can begin to imagine its almost magical nature. In addition, there are such unusual natural phenomena as a boiling lake and hot waterfalls, to say nothing of the more usual sulfur springs and crater lakes. The high mountains attract clouds, creating frequent showers interspersed with sunshine, as a result the island is known as the land of many rivers. It could equally be known as the land of many rainbows. You are sure to see some, and, around the full moon, you might see a moonbow. Dominica also has some lovely beaches, but not in the profusion of the islands to the north and south, so tourism is low-key.

Dominica has 70,000 inhabitants who have a natural curiosity about outsiders and enjoy meeting visitors. Nature lovers and free spirits will likely rate this majestic land their favorite. Some of the island can be seen from the boat, but the best times are found walking inland. Light rain gear is advisable, as the island attracts frequent showers, which alternate with bursts of bright sunshine.

Exploring inland should be a priority. It should be noted that many of Dominica’s hikes, including the one to Trafalgar Falls, can cover slippery and muddy terrain and should only be undertaken by those who are reasonably agile and fit. The Dominica Forestry Department has laid out many hiking trails in the extensive area included in the island’s national parks. They have done an amazing job, sometimes laying out miles of log walkways. These trails are a delight. You can get trail maps from the Forestry Department in the botanical gardens in Roseau. There are charges for visiting park sites and tickets can be bought by the visit ($2 US single site), or all sites by the day ($5 US), week ($10 US). All the money goes towards park maintenance and is well spent. It should be noted that just about all of Dominica is spectacular, and there are numerous lovely hikes on small roads and paths that are not part of the park.

Dominica has seven potentially active volcanos (most other Caribbean islands only have one). There is no expectation of an eruption anytime soon, but it helps explain the dramatic scenery. An undersea fault to the north of Dominica has been active recently with a few earthquakes. This equally effects the Saintes and Marie Galant.

Prince Rupert Bay is a magnificent protected bay over 2 miles long and a mile deep. Under normal conditions, you can anchor almost anywhere off the coast, from the Coconut Beach Hotel on the south shore right around to the Purple Turtle restaurant on the north. The harbor is so good that Portsmouth was picked to be the island’s capital. However, this never came to be because of the extensive swamp below the Cabrits. In bygone days, malaria or yellow fever often afflicted people trying to settle the area, and so Roseau became the capital. Today, you can consider this area to be healthy. Elizabeth Pampo Israel, the oldest person in the world, lived here till her death at the age of 128.

Several major attractions are easily accessible from Portsmouth. A trip up the Indian River is an amazing experience, unlike anything else you find in the Eastern Caribbean. The river quickly narrows and gets completely overhung by huge swamp bloodwood trees on both sides. Their massive buttress roots spread out above the soil and down into the water, twisting and tangling into interesting wavy designs. Here and there, long vines dangle into the river, and as you glide along you see fish below and crabs on both banks. Overhead, the trees form a complete canopy, so it is dark and cathedral-like. This, along with the occasional sounds of insects and birds, creates a magical quality. Many of the herons are quite tame, and there is a chance of seeing iguanas. Be sure to use one of the official guides we mention below. Outboards are not allowed on the river beyond the bridge, and you should not take your own dinghy beyond the bridge. One of the best times to go is early in the morning, before anyone else starts up. This is especially so in late February or early March when the swamp bloodwood trees are in fruit and attract groups of foraging parrots. Or go in the late afternoon, when most of the others have left.

The Cabrits National Park has well-marked trails. Fort Shirley, an old British fort dating from the 18th century, has been partially restored and there is a small museum. It includes a restored large building that can be used for big events like weddings. The guiding light in this enterprise is Dominica’s local historian Lennox Honychurch, whose book, The Dominica Story, is a delight to read. If you follow the trail to the top of East Cabrit, you will be rewarded by splendid views over the harbor and surrounding country, including the swamp. The proximity of the swamp makes for interesting bird life on the road leading to the park. You should also hike to the top of West Cabrits for great views of the Saintes and Guadeloupe in clear weather. A large dock and a building for craft vendors on the Cabrits caters to adventure-type cruise ships. Part of this is low enough to be accessible by dinghy, and you may use it as long as no cruise ships are here. When the gates to the dock are locked, you can normally walk through the building.

Roseau is the capital of Dominica and the main town. Of all the islands’ cities, this city has the most wonderful assortment of authentic and very lovely Caribbean buildings, along with some new blocks. Many older buildings feature balconies and overhangs and intricate gingerbread trim. If you peek into gateways, you’ll see interesting courtyards. Much of Roseau is being renovated and some of the refurbished older buildings are gorgeous. A few of the older, simpler wooden buildings are untouched and beautiful, just because of their weathered and aged appearance. Roseau is the only city in the Eastern Caribbean I know of in which many of the houses have cellars. These practical rooms allowed for cool storage and provided a place to shelter in a hurricane. At the Sutton Place Hotel one has been converted to a cozy bar called Cellars Bar.

The waterfront of the town has had a face-lift and is now a wide street, with a long walkway. A cruise ship dock stands at one end, a ferry terminal in the middle, and a fishing port towards the river. Roseau is the best place from which to explore the southern national park and surrounding attractions. It also has the best collection of shops and restaurants.

Yachting people will appreciate the two fuel docks, a water dock, and the Dominica Marine Association, which has brought all those dealing with yachts under one umbrella and who work together to try to maintain security (which is generally good). If you have any security problems, call the current president of the DMA, Hubert Winston (767-275-2851). 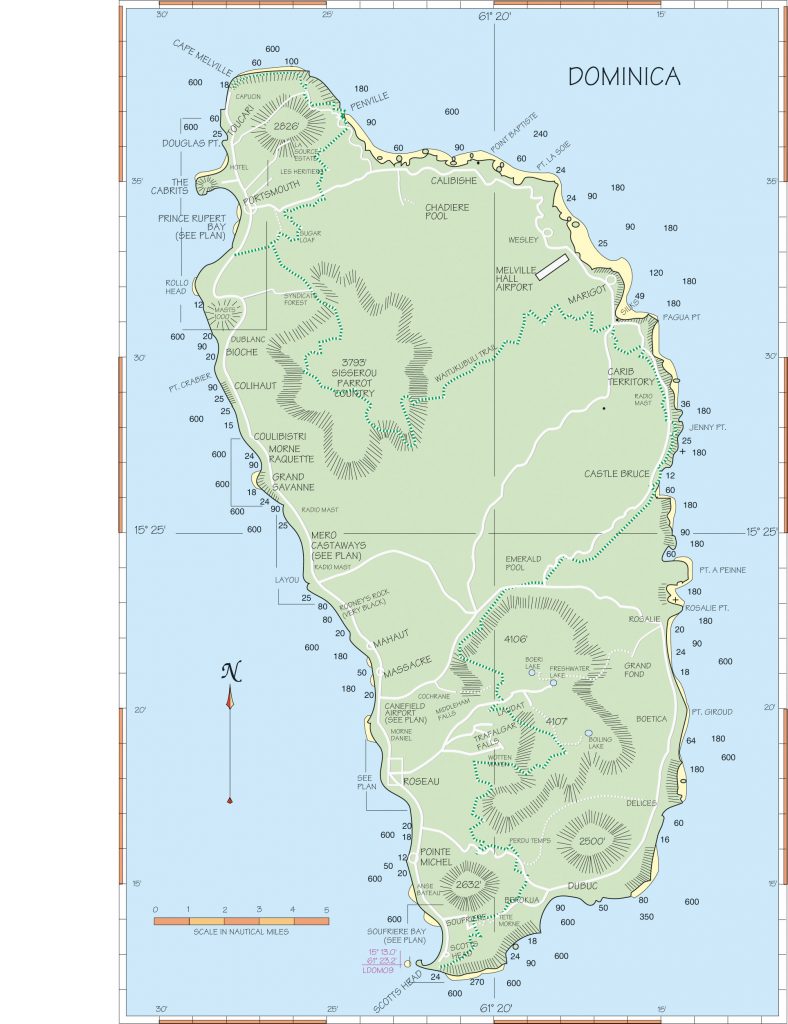