Barbados is 21 miles long by 14 miles wide. It is a civilized, orderly country with a gentle topography of rolling hills and green fields. Under British rule for over 300 years, it is often called Little England. Barbados became independent in 1966 and is today a stable parliamentary democracy and active member of the Commonwealth. It is a relatively affluent country. The driving force for the economy is tourism, and this has fueled many other light industries, including printing and light manufacturing. The second largest money-earner is in the overseas financial sector.

The majority of the 260,000 inhabitants are of African descent; the rest came mainly from England and India. The island has many British traditions, though these are well mingled with African influence.

Geographically, Barbados is an anomaly in the Eastern Caribbean. Ninety miles to the east of St. Vincent, it is way outside the arc of the other islands and straight to windward. It is the only island in the Eastern Caribbean that is not volcanic. It is the top of a buckle in the seabed that got pushed above the surface during tectonic plate movement. At a later period it was largely submerged, then rose again giving it a heavy limestone capping. As a result the island is relatively flat (the highest hills are about a thousand feet) and it has spectacularly beautiful white sand beaches.

In the days of sail, especially in the days of square rigged ships, it was very hard to reach from the rest of the island chain, which helped it stay outside the battles between the British and French that characterized the history of most of the other islands.

Left to their own devices, English-speaking Bajans evolved the most distinctive accent in the region. It is a pleasant friendly sound, thick enough to cut with a cutlass. After you have spent a while here you will recognize a Bajan anywhere else in the world as soon as he speaks.

Bajans count among the finest seamen in the Caribbean. Their fishermen venture far out to sea in all conditions. For their yachtspeople, visiting any other destination and getting home involves serious windward work in the open ocean, with seas that often seem rougher than they do in the island chain. There is often a foul current to deal with as well. I am always amazed at the casual way Bajan Yacht crews turn up for races throughout the Caribbean and they think nothing of beating their way back afterwards, a trip that would give most of us considerable pause.

Missed by Columbas, Barbados narrowly escaped being named after a Catholic saint. The word Barbados came from the Portuguese for the “bearded one,” a name given to it by a visiting Portuguese explorer Pedro a Campos, who stopped by in 1536 and was impressed by all the fig trees with their thick aerial roots that give them a bearded appearance.

There is plenty to do here, with many types of restaurants and shops, lots of nightlife and plenty of roadside attractions. The people are very welcoming – they understand the value of visitors and treat them well. While the south and west coast are heavily built up to cater to this industry, if you head to the northeast or center of the island, you soon get away from it all.

Barbados is a landfall for over 300 yachts every year between November and March. Most arrive in modern conventional craft, but they have their share of the oddballs too. Bombard arrived here having drifted over on his inflatable dinghy, the raft Ra arrived here as did the world’s smallest gondola. Someone even crossed in a converted factory boiler and a Frenchman claimed to have swum across, towing his rubber raft behind him. 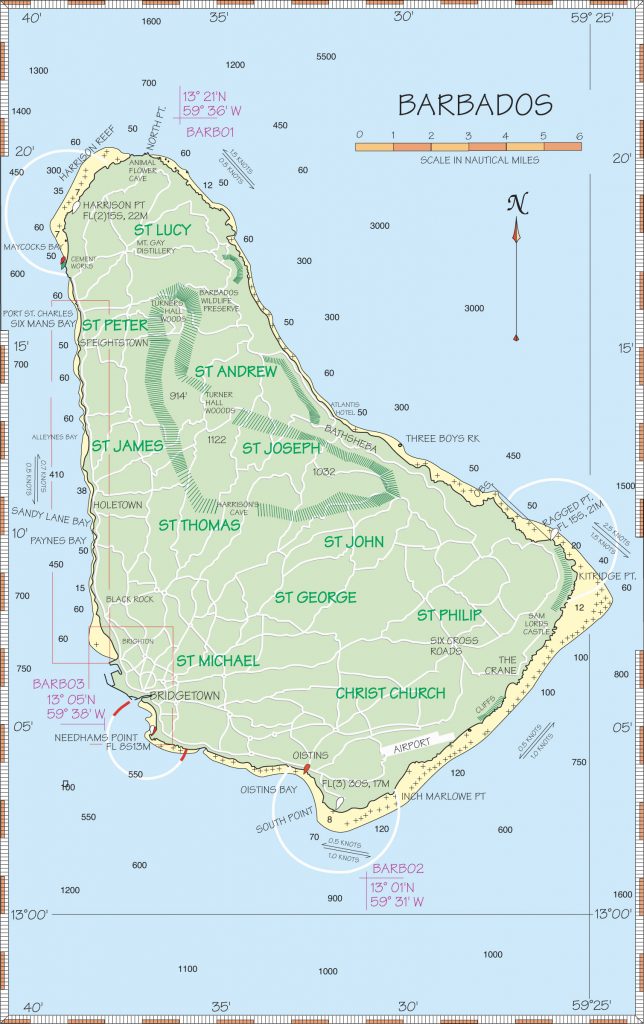