The Caribs called Martinique Madinina ~ Island of Flowers. It is the largest of the Windwards and, apart from a few short spells under the British, has been French since it was colonized. It is a part of France and feels it, with excellent roads and a thriving economy. Nearly every bay has a wonderful government-built dock, ideal for leaving your dinghy. Fort de France is a busy city, bustling with shoppers and cars. The smaller towns are quieter and some look so clean they could have just been scrubbed. You will notice the smells of wonderful coffee and delicious cooking.

You can get almost anything done in Martinique ~ from galvanizing your boat to having stainless steel tanks made. The sailmakers are first rate, the chandleries magnificently stocked, and restaurants and boutiques abound. In short, when you have had enough deserted beaches and raw nature, Martinique is the place for a breath of civilization. And the island has enough excellent and varied anchorages for a week or two of exploring. Choose bays with fashionable resorts, sleepy waterfront villages, or visit deserted bays with excellent snorkeling. Well-marked trails make hiking a delight.

Empress Josephine grew up in Martinique on a 200-acre, 150-slave estate near Trois Ilets. A strange quirk of fate links Josephine and Martinique to the Battle of Trafalgar. In 1804, Napoleon was master of Europe, but the British still had naval supremacy and largely controlled Caribbean waters. However, ships were always scarce and some bright spark noticed that Diamond Rock on the south coast of Martinique was just about where the British would station another vessel if they had one, so they commissioned the rock as a ship. It was quite a feat to climb this steep, barren, snake-infested pinnacle and to equip it with cannons and enough supplies and water for a full crew of men. But they succeeded and for some 18 months H.M.S. Diamond Rock was a highly unpleasant surprise for unsuspecting ships sailing into Martinique. Napoleon was incensed; this was, after all, the birthplace of his beloved Josephine. Brilliant as he was on land, Napoleon never really understood his navy or its problems and considered his men to be shirkers. Consequently, he ordered them to sea under Admiral Villeneuve, to free the rock and destroy the British admiral Horatio Nelson while they were about it. Villeneuve slipped out under the British blockade of France and headed straight for Martinique. Lord Nelson smelled blood and bounty and hurtled off from England in hot pursuit. Poor information sent him on a wild goose chase to Trinidad, so Villeneuve was able to liberate the rock and return to France, prudently keeping well clear of Nelson.

Napoleon was none too pleased with Villeneuve because the British fleet was still in control of the high seas, so he was ordered to report in disgrace. Villeneuve preferred death to dishonor, so he put his ill-prepared fleet to sea to fight Nelson at the Battle of Trafalgar. Ironically, Villeneuve, who wished to die, survived the battle, and Nelson died.

Today Martinique is very civilized, and while it helps to speak French, it is not absolutely necessary. Many more locals now speak English.

Numerous ATM machines will keep you in cash, and most restaurants and businesses accept Visa and MasterCard. 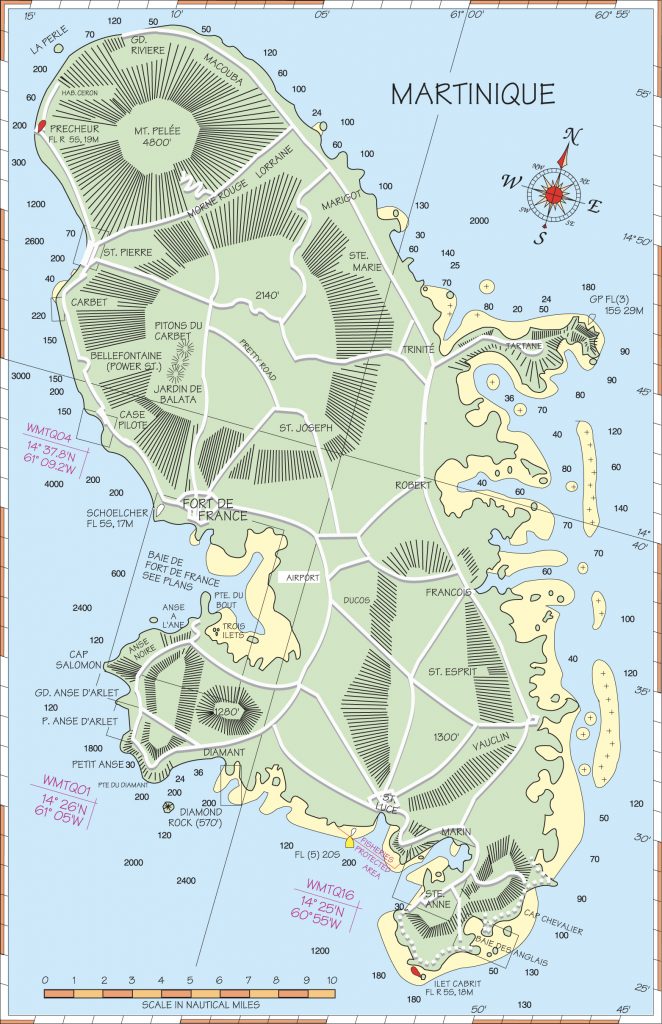