Montserrat’s first European settlers were Irish who arrived from St. Kitts in 1630, having experienced problems with the Kittian Protestants. A second wave of Irish settlers arrived in 1649, after Cromwell conquered Ireland. They began as small farmers growing mixed crops, but the economy of the island slowly changed. Sugar became the main crop, slaves were introduced, and over the years the smaller farms became uneconomical. Many of the Irish returned to their homeland. They left behind smiling eyes, Irish names such as O’Brian, Dublin, and Ryan, and an Irish stew called “goat water.” Today, Montserrat is known as the other Emerald Isle.

As you sail past Montserrat, it is like two different lands. The southern half is starkly beautiful, a harsh terrain dominated by the awesome Soufriere Hills volcano, barren and smoking against the skyline. The remains of the ruined capital, Plymouth, are a humbling reminder of nature’s power over years of human endeavor. On the southeastern coast, you can see historic windmill towers and buildings buried to their roofs in volcanic ash, and boulders the size of large houses spewed out by the volcano, lying miles below the summit. By contrast, the island’s north is lush and green, with verdant mountains and handsome modern houses perched on the hills.

What you cannot gauge from the sea is the extent and beauty of the northern part of Montserrat. Most of the habitations follow the road that runs from Little Bay in the north, along the west coast to Salem in the south. This area is protected from the volcano by the Center Hills mountain range, and what you see is an island of almost picture book perfection. On one side, lush dark green mountains are steep and convoluted. On the other, the land falls away to the coast, offering a perfect panorama of the Caribbean Sea, with views of the islands of Redonda and Nevis to the west. At nearly every turn, coconut palms or brightly colored flowers provide the perfect frame for a photograph. Houses are typically modern-day Caribbean, which means they can be small brightly painted wooden houses shaded by dark green breadfruit trees, whitewashed bungalows, or fancy modern mansions.

In 1995, the population was around 11,000 people who farmed, fished, and were employed in the tourist industry. Many Americans and Canadians bought homes here to escape the cold northern winters. The Soufriere Hills volcano first erupted in 1995, and major eruptions in 1997 led to the evacuation and eventual destruction of the capital, Plymouth. Living and business conditions became very harsh with almost daily volcanic dust polluting the air. There followed an exodus of nearly two thirds of the population, and those who did not have homes in the north had to resettle in the safe zone. The current population is around 5039.

In the summer of 2003 the huge volcanic dome collapsed, and the volcano showed every sign of going to sleep. This led to the reopening of many areas. The government removed the ash (some of it several feet thick) from many roads. People started repairing their damaged houses. You could go very close to Plymouth and up the hills behind it for dramatic views of the path of destruction and the ruined town. Then, in the beginning of 2006, there was another spurt of dome growth, lots of activity and several major eruptions, including one in December 2008 and one of the biggest ever on February 11, 2010. The exclusion zone has been moved back up from Bransby Point to Old Road Bluff. The Vue Point Hotel, having been completely renovated and booked solid for the season, was evacuated. It is not easy living with a volcano.

The tone of the island is quiet and rural. There are hills with cows and goats and few enough cars that you don’t feel threatened as you walk along the roads. The mood is generally upbeat and very friendly. Most Montserratians living on the island today are delighted to be there and not in some tenement in London. The outlook is to the future: to bring in more tourists, to bring back Montserratians who fled, to create more jobs.

Just as the volcano in the south testifies to the power of nature, the northern end testifies to humans’ ability to adapt and thrive in the face of adversity. 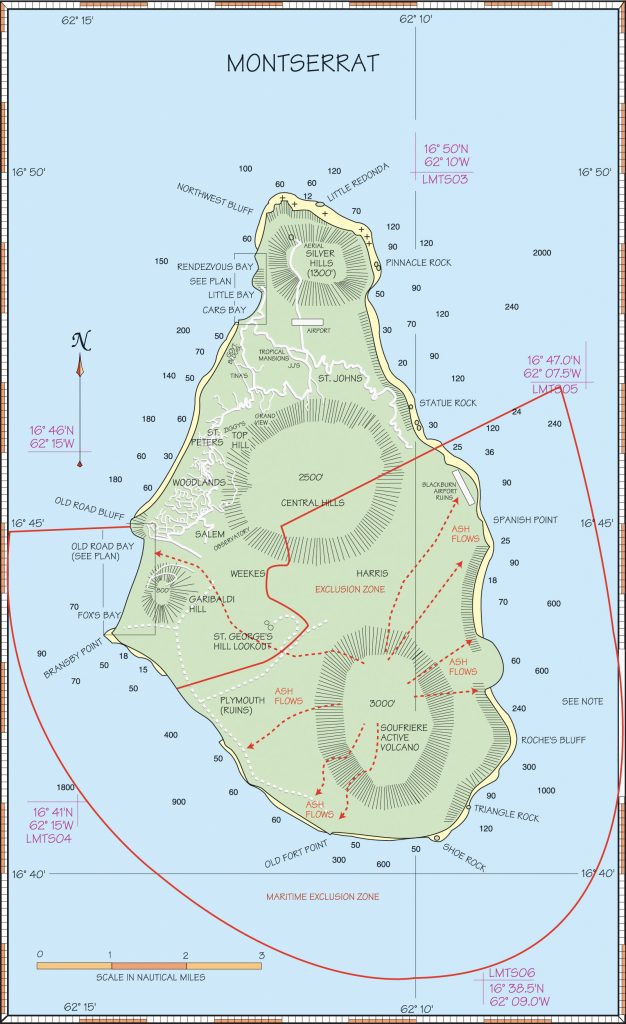